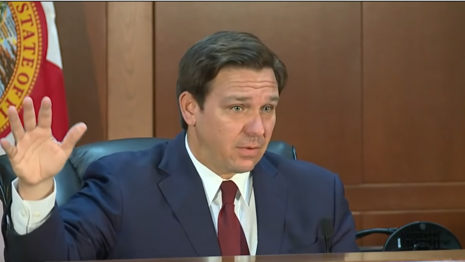 On Thursday's Morning Edition, they stacked the verbal deck against Florida Gov. Ron DeSantis in the state's redistricting battle. Anchor Rachel Martin began with a hint of racial animus: "Governor Ron DeSantis wants maps that would dilute African American voting in two key districts, and he has threatened a veto if lawmakers don't comply."

Miami-based reporter Greg Allen also used animus words: "The boundary lines were approved by the court several years ago to uphold federal and state protections for Black voters. DeSantis has proposed his own maps that eliminate that one and another African American district in the Orlando area."

Implicit in the NPR analysis is that "protections" for blacks means representation by black Democrats. It sounds explicitly discriminatory (in NPR's preferred direction). Dan McLaughlin at National Review offers a deep dive into the racial gerrymandering in Florida.

NPR offered quotes from a conservative expert, and a liberal expert....but the liberal group is nonpartisan (again!);

ALLEN: That's Robert Popper with Judicial Watch, a conservative activist group. He argues that drawing a district more than 200 miles long that in one place is just a few miles wide violates a federal requirement for compactness. The district connects rural and urban Black communities along Florida's northeast border. Michael Li with the Brennan Center for Justice says the district is protected not just by the Federal Voting Rights Act, but also by Florida's constitution, which prohibits lawmakers from weakening existing minority voting districts.

The Brennan Center folks also double as a "voting rights group" that pairs with Democrats. (Notice the implication that Democrats favor voting rights, unlike the conservatives and Republicans).

ALLEN: For Democrats and voting rights groups, the map drawn by the Republican-controlled House Committee also has problems. It eliminates a protected African American district in Orlando, and voting rights groups will likely challenge it in court if it's adopted. Some Republicans, especially conservative activists, believe the courts, both at the federal and state level, may be ready to reevaluate protections for minority voters.

Naturally, Allen concluded that DeSantis is doing all this to gain conservative support if he runs for president:

ALLEN: DeSantis's map would reduce the number of protected African American districts in Florida from four to two and  would likely give Republicans two additional seats. Isbell believes the governor, a potential 2024 GOP presidential candidate, is trying to firm up support among conservative activists.

So why isn't NPR focusing on redistricting in Democrat-run states like New York, Illinois, or Maryland? On Morning Edition on February 9, it was Ohio. On Weekend Edition Sunday on February 13, they focused on New Hampshire (which only has TWO districts!) Last fall, NPR focused on Ohio, Georgia, and Texas.

On February 7, an overarching story on redistricting by Steve Harrison allowed this point: "Courts in Ohio and Pennsylvania have also rejected Republican-drawn maps, and in states like Maryland and New York, Democrats have passed maps that are arguably more gerrymandered than North Carolina."