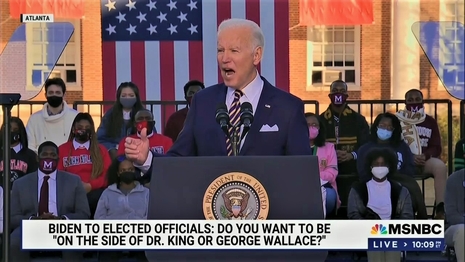 On Tuesday, President Biden gave a “fiery” speech in Atlanta attacking anyone who disagreed with him on current Democrat “voting rights” bills as akin to southern segregationists of the 1960s, like George Wallace and Bull Connor. He compared his side to Abraham Lincoln, and his opponents to Jefferson Davis. Many found it obnoxious, but the networks lined up to promote his “appeal to the lessons of history,” like competing candidates for president of his fan club.

They all reported Biden traveled to the "heart" or the "cradle" of the civil rights movement to promote "voting rights" and override "restrictive" new laws in red states, especially Georgia.

ABC was the worst of the big three networks, failing to grant even five seconds of soundbite to a Republican, or even a resistant moderate Democrat.

Cecilia Vega's report offered six Biden snippets adding up to 91 seconds of air time, and then added an interview with a black "child care worker" who growled about "Jim Crow 2.0." It turns out she works for the "Barack and Michelle Obama Academy" in Atlanta as a teacher's assistant.

Vega set up the subject of racism: "You feel like you're being targeted as an African American woman in this state?" To which Muldrow replied that she indeed does and she doesn't appreciate it.