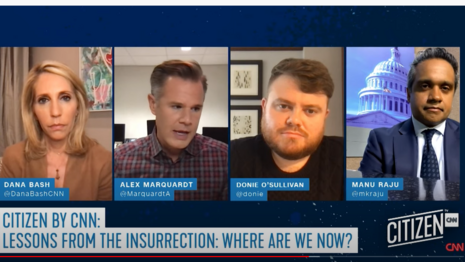 At 2 pm on Wednesday, CNN's "Citizen" project live-streamed a panel discussion with four of its journalists on the top "Lessons of the Insurrection: Where Are We Now?" Dana Bash hosted the panel and read some questions from the audience for the panelists to address.

You might be shocked to learn CNN didn't pick the question I sent, asking if the Portland riots in the summer of 2020, and attempts to light the federal courthouse on fire, amounted to an "insurrection."

Instead, halfway through, Bash read a vague question about how do we prevent democracy from falling apart, and then joked "that's such an easy question to answer." So why pick it? Apparently, because it was a good launching point for CNN to attack Fox News.

ALEX MARQUARDT: It’s hard not to despair right now, and to go back to the previous question about truth and the news and that kind of thing, you know, we can put out as much as we possibly can about what happened that day, what happened during the election, and it’s not going to reach the people who need to hear it most, in order to heal democracy, in order to heal these divides.

MARQUARDT: If anything, since January 6, I feel like this chasm between, you know, frankly those who are living in reality and those who aren’t, has only grown bigger. And that is fueled by lawmakers who won’t tell the truth, fueled by those right-wing outlets who won’t tell the truth. And who are you know, and whose viewers and audience are, continue to believe things that simply aren’t true.

MARQUARDT: I mean, I think one of the benefits, one of the many benefits of this January 6 committee is now seeing, you know, the relationship that the former president had with members of Fox News and how they were sort of part and parcel the same thing, and how they realized on January 6 what was happening and then, in the case of Laura Ingraham, comes out that night and says ‘oh no, these protesters were actually Antifa.’

That's not an accurate quote. Ingraham said "there are some reports that antifa sympathizers may have been sprinkled throughout the crowd." Even PolitiFact noted "Ingraham did tweet out a BuzzFeed News story on Jan. 7 disproving an erroneous Washington Times article that she had cited on Jan. 6, which falsely claimed antifa activists were identified among the rioters."

But in minute 47, CNN's Manu Raju launched into a lecture on how facts matter, and yet CNN is nonpartisan:

RAJU: I’m also just a firm believer that the facts do matter. Even if these days, people tend to have their own alternative facts, and not arguing from the same set of facts. I do think that at the end of the day, the facts matter. Our job in the media is to report the facts. When we get it wrong, acknowledge our mistakes, and earn trust from viewers and readers by reporting the truth and speaking the truth. And if partisans on either side want to say whatever they want, let them say it. But we have to just keep saying it as it is.