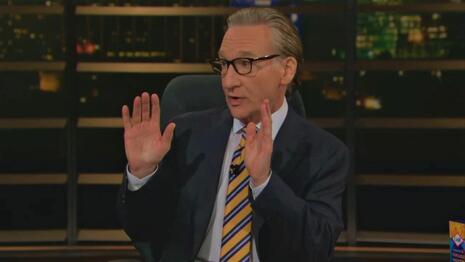 He was discussing jury challenges with racial impacts, like in the Ahmaud Arbery trial, with former PBS talk show host Tavis Smiley (who lost his job due to sexual harassment allegations).

Maher complained about an emerging tone of “I don't trust any black people. Oh, I don't trust any white people. It's like prison. You gotta join a tribe. I mean, that’s not – I don't want America to go in that direction and I don't think we are being led in the right direction by either side.”

Smiley claimed that wasn’t a black thing. “Yeah, but when you say we, that's my only issue, let me push you ever so gently. What ‘we’ are you talking about? Black folk and brown people ain't doing nothing to the larger white community.” Maher replied “I said ‘we,’ the country.” Smiley doubled down, that “some of us are not engaged in that nonsense activity."

Then Maher turned on MSNBC.

MAHER: After the governor of Virginia, the new governor won, [the] MSNBC headline was "Glenn Youngkin's victory proves white ignorance is a powerful weapon." I don't think that helps. I don’t think some of this – I’m an old-school liberal, I believe in a color-blind society, that's not where woke is. There's a lot of resegregation going on, there's a lot of you are either a racist or you don't know you're a racist. So yes, there's some we on the other side, too.

The article he cited was penned by Ja'han Jones on “The Reidout Blog.” Jones touts his previous projects as the "Black Hair Defined" blog at HuffPost and the "Black Obituary Project."

Jones complained that critical race theory is a catchall phrase for intellectually lazy people — many of them white — who want to stigmatize any discussion about American racism....The Youngkin campaign discovered that this contingent of angry, willfully ignorant white people was the key ingredient needed to elect a GOP governor in Virginia for the first time since 2009. We can expect more Republicans to try the same gambit as we inch closer to next year’s consequential midterm elections."

Bizarrely, Smiley suggested that somehow Jones (and Joy Reid) aren't black.  "Even with the example you just mentioned, these are not people of color. The ones who are catching the hell every day are not the ones raising the hell. They're not the ones causing this problem."