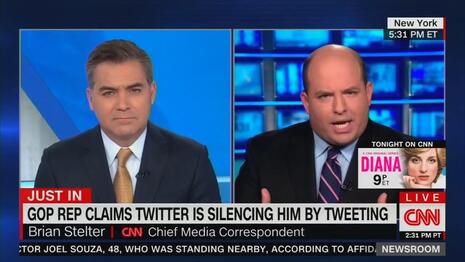 Most of Jim Acosta's career during the Trump years was a political stunt.

Deputy HHS Secretary Rachel Levine (formerly Richard) was sworn in a a four-star admiral last Tuesday to the U.S. Public Health Service Commission Corps. Banks tweeted, “The title of the first female four-star officer gets taken by a man.”

STELTER: Right. I think you nailed it! You just revealed the name of the game. It's about creating this opportunity for a political stunt. Banks said in a statement, if they silence me, they will silence you. We can't allow Big Tech to prevent us from telling the truth. So he portrays himself as a bold truth teller, when the real truth is that he's transphobic. That's what he's revealing through this comment about Dr. Rachel Levine. He says he's been banned. He's only been temporarily locked.

This is another opportunity for liberal journalists who boast they are "fact-based" to proclaim against all biological evidence that men can decide to become women, and everyone must honor their lifestyle choice. Twitter’s “hateful conduct” policy expressly prohibits referring to a transgender person by a gender other than the one they choose.

Acosta was trying to come across as a caring nurturer. He lectured Banks to "Be a human being. People are people." Is Acosta going to break into the Depeche Mode song? Is that Acosta's motto, "People are people, so why should it be, you and I should get along so awfully"?

PS: One thing we can all guess is that Twitter (and CNN) are not going to hold transgender activists to any standard of decency. The "marginalized" are excused from the decency rules. Charlotte Clymer can mock Andy Ngo being beaten as a, well, political stunt, and there's no lectures.