On PBS, Capehart Lies That CRT Is Taught NOWHERE to Children in U.S. Schools

Liberals are still brazenly lying about this. On Friday's PBS NewsHour, panelist Jonathan Capehart insisted "Critical Race Theory is not taught in elementary schools, middle schools, or high schools anywhere in the United States." They were closing out a Friday news roundup with talk about the Virginia governor's race, and Capehart said Republican Glenn Youngkin was just spreading baseless fear.

CAPEHART:  Glenn Youngkin and Republicans are filling that gap that you're talking about with fear. What Glenn Youngkin is doing is talking about Critical Race Theory. And let's be clear about something. Critical Race Theory is not taught in elementary schools, middle schools, or high schools anywhere in the United States. If it's taught at all, it is taught in law schools, so way far away from any parents' care.

Yet, yes, Terry McAuliffe walked right into it by saying what he said at that debate and handed Youngkin an issue. But the fact that we're having this conversation about Critical Race Theory, it's become a catch-all for all of the history that needs to be taught that makes white parents uncomfortable.

And you put your finger on it. This is a conversation about race. And Youngkin is using race and fear as a way of trying to garner votes, pull out Trump voters, pull out squishy Republican voters who might not want to vote for him. But they view this as an issue, you know, something that makes them angry, you're trying to indoctrinate my children, as opposed to trying to teach your children the true history of this country.

That's what all of this is about. And there are people who are afraid of that. 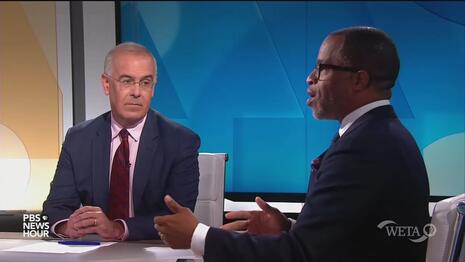 The lightning-rod in the Virginia governor's race is the Loudoun County schools, where it's obvious and reported that they hired "equity" consultants to prepare them to teach Critical Race Theory, which is not the "true history of this country." It's a philosophy that preaches systemic racism and racial guilt.

At least David Brooks laid out a different tack on this issue (which is unusual), that this was a very bad issue for Democrats.

BROOKS: Terry McAuliffe made a very foolish statement in his debate, where he said parents should not be in charge of their kids' educations, which is going to set every parent's teeth on edge.

I think there's a huge issue. I think this is a very bad issue for the Democrats. A lot of things, people don't vote on. But if people feel their kids are being indoctrinated with this or that, then they're going to get really angry, and they're getting really angry.

And there's the angry people who are going to the school board meetings, but then there's normal anger of more stable people. And they will rebel. And what's — the underlying cause of what's happening here is that people in the median education school, they have gone a little further and not — significantly left in the last few years. The median parent has not done significantly further left.

So there's a cultural gap in the values and the way we talk about history, the way we talk about sexual education and gender issues. A gap has opened up between the people tend to be teachers and the people who tend to be parents. And that gap is now creating this conflict over whose values are going to be in the classroom. And so it's become a culture war. And I do think parents are extremely sensitive about this.

The PBS NewsHour is brought to you by you -- the American taxpayer -- and by Johnson & Johnson.