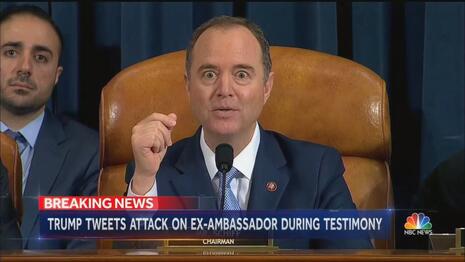 On Monday's Morning Edition, National Public Radio spent seven minutes promoting Rep. Adam Schiff and his brand-new book on the first Trump impeachment, Midnight in Washington: How We Almost Lost Our Democracy and Still Could. The book comes with blurbs from Stacey Abrams, Jon Meacham, and Michael Beschloss.

The NPR segment was so soft that it began with 87 seconds of a Schiff answer with no audible question from interviewer Michel Martin. But, inevitably, Schiff became choked up. (As Tucker Carlson has noticed is a pattern.) Everyone who wanted to keep Ukraine safe for Biden access-for-cash schemes was a hero:

SCHIFF: There were also great stories of heroism, and I wanted to tell those stories. I wanted to bring the reader into the committee room and give them a sense of what it was like when Marie Yovanovitch walked into that room, who stared down the most powerful man in the world, who was told that she had to get out of Ukraine on the next plane because they could not protect her and the president threatening her in the middle of the hearing - to see her courage, [pause] to see the kind of hushed respect the audience had for her -- [Large pause] I, I, I wanted people to feel that.

MARTIN: You still feel it.

MARTIN: Even now you still feel it.

SCHIFF: Well, it's not just me. I remember during the trial, for example, playing the video of Alexander Vindman talking about, here, right matters, and looking around the Senate chamber and seeing Tim Kaine and his eyes glistening and realizing that he was just as moved as I was, watching this on a video. I had seen it live, obviously. But it was still that powerful to him because it resonated with his experience in life....

In the case of Marie Yovanovitch, she was the first through the breach. Had she not had that courage, I don't know whether anybody else would've come forward. And -- so yeah, that really affects me.

The story also ended in other tears, with his wife in tears over all the death threats from conservative haters [Click on Expand]:

MARTIN: Before we let you go, you've served for many years, and you have seen quite a lot. You have been personally vilified. You have been viciously attacked - not just ridiculed, but your personal safety has been threatened repeatedly. You now have to have a measure of security that you didn't have to have before when you first started serving in Congress. I can't imagine that when you first started serving in Congress, this is what you thought it would be like. What keeps you going?

SCHIFF: Well, it has been tough. I remember very much, in the thick of it, being in the kitchen with my wife, and there were tears in her eyes, and I was hugging her, and she was trying to grapple with the fact that millions and millions of people just utterly hated her husband. And we were getting death threats, and there were threats against us and our kids and our family. And we had to even contemplate whether she and the kids should stay in the house or they should go to live with one of our relatives until this was over. That was certainly not what we thought we were signing up to when I ran for Congress.

They've been difficult times, but the way I got through them, if it's any help to anyone else, is one day at a time. I would get up in the morning, and I would say to myself, I just need to get through the day; I just need to get through the day. And at the end of the day, I would say to myself, sometimes with some surprise, I'm still standing. But I also felt a real sense of mission, that the democracy was in peril, that I was -- by dint of no merit of my own -- in a position where I could do something about it. I had an important role to play, and as long as that was the case, I was determined to play it as well as I possibly could. And do my duty until the danger passed. And what keeps me at it is the danger has not passed.

This radio drama was brought to you by....you, the American taxpayer. You subsidize the national operation in DC, and hundreds of public-radio stations across America. Contact Public Editor Kelly McBride here.