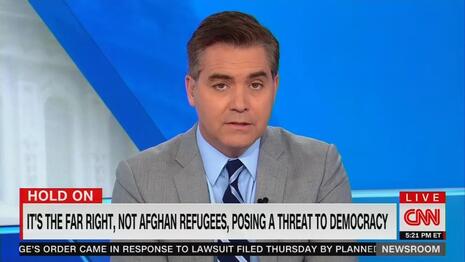 We might ask ourselves: Why give this relentless self-promoter any attention for these five-minute rants? The answer is: "THIS...IS CNN." It's now their brand: one-fifth news, four-fifths hot air.

The screen graphic cried "It's the far right, not Afghan refugees, posing a threat to democracy."

ACOSTA: Over on Fox, human manure spreader Tucker Carlson has floated yet another race-baiting conspiracy theory, that tens of thousands of Afghan refugees are being welcomed into this country in order to change the outcome of future elections.

TUCKER CARLSON: Many of whom will now be moved into neighborhoods around the United States and stay permanently. They didn't seem to encounter any problems in doing this. Thanks to meticulous and thoughtful planning, Operation: Change America Forever came off precisely according to plan. It worked flawlessly.

ACOSTA: Did he say Operation: Change America Forever? I think change is already in the air.

Then he cited the January 6 riot and he ran a creepy clip of Rep. Madison Cawthorn suggesting that if elections are rigged, he may have to take up arms against fellow Americans. "The threatening language does not end there," Acosta announced, turning to House Minority Leader Kevin McCarthy warning that if the telecom companies cooperate with the very partisan 1/6 Select Committee to get phone records, "a Republican majority will not forget."

Acosta ran another clip of Carlson's show, where Rep. Marjorie Taylor Greene promising to "shut down" telecom companies that cooperate with the Democrats, and Carlson saying "Good. I hope they're afraid of you. They should be."

From there he went to Texas, trying to shame conservatives who oppose mask mandates by saying they're a little hypocritical about "my body, my choice." As if there's not a difference between donning a mask and killing an unborn baby? He had clips of screaming, threatening white men, to boot.

ACOSTA: What will we tell the Afghan refugees who just fled those schools for girls back in their home country? I guess the girls here will have to fill them in. Unfortunately, what we will tell them is that some members of the far right in this country have apparently decided they will resort to intimidation, and in some cases, even violence to get what they want. And they could sweep into power faster than the experts thought possible. Sound familiar?

Sort of like an American Taliban. It is starting to look like a combination of theocracy and thugocracy. The leaders of this MAGA-ban movement -- people like Marjorie, Madison and Tucker -- they're not counting on an intelligence failure or a lack of planning on your part.

They're counting on a lack of courage to stand up for your rights in this country. Does that ring a bell? The anti-immigration, anti- Democratic, anti-women's rights forces have all sought these kinds of changes for years, even decades in this country. Their operation to change America forever is well under way. It's just changing in a way they don't want you to see.

This is what they call a "Murrow" at CNN, a pompous lecture from a "news anchor." But you can see precisely who this denunciation of the "far right" delights: the radical left. Check out Occupy Democrats gushing on Twitter:

BREAKING: Jim Acosta calls Marjorie Taylor Greene, Madison Cawthorn and Tucker Carlson “the American Taliban” and “a combination of theocracy and thugocracy” because they “resort to intimidation and violence” to push their extremist agenda. RT TO THANK JIM FOR CALLING THEM OUT!