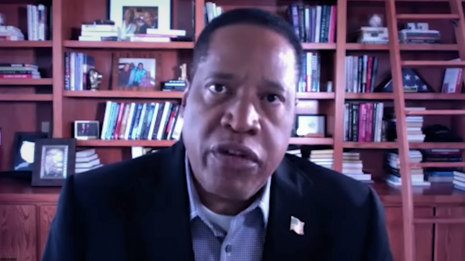 NPR's public editor Kelly McBride confessed in 2020 that NPR was slow to address Tara Reade's sexual assault allegations against Joe Biden. But NPR wasn't slow at all to highlight an ex-fiancee's allegation that black conservative California gubernatorial candidate Larry Elder waved a gun at her while high on marijuana during a breakup in 2015. It dominated their segment on the California recall on Wednesday's Morning Edition.

It's easy to recall that NPR jumped first on the unproven allegations from Anita Hill that Clarence Thomas sexually harassed her. Their California expert, Scott Shafer from San Francisco affiliate KQED, implied there was probably more dirt on Elder they hadn't dug up yet.

NPR host A Martinez asked Shafer "those who brought this recall election say it's primarily about Newsom's handling of the pandemic. Those against it say it's a partisan attempt to take power in the state. So overall, do voters seem engaged?" Shafer noted there's not a majority in favor of the recall election, but recall proponents are very engaged, so Governor Gavin Newsom's challenge is to get Democrats to turn out. NPR didn't focus on why Newsom was in danger of losing his job.

Then came the part where Elder was described as "very controversial" -- twice -- and as a marijuana-induced gun-waver at women:

MARTINEZ: All right, so turnout a top priority for Gavin Newsom. What has been his messaging so far?

SHAFER: Well, from the beginning, Democrats have tried to frame this as a right-wing power grab, an attempt by supporters of Donald Trump to basically undo the results of the last gubernatorial election. But, you know, as Trump sort of fades into the rearview mirror, that doesn't really work quite as well.

And so they're also trying to frame it as a race between Newsom and the leading Republican, who is conservative talk show host Larry Elder. He's very controversial. He calls himself the Sage of South Central, which is where he grew up - South Central LA. And he's made some very controversial comments in the past about women. And then just recently, an ex-fiancee came forward and said that he waved a gun at her during an argument when he was high on marijuana. He denies that, by the way. Nonetheless, she's sticking by her story.

So there's a lot that, you know, isn't known about this guy. He also says that Democrats make too big a deal out of racism. He is African American. And Newsom is saying, look; if this guy gets elected, if he replaces me, he's going to throw out the mask mandate, the vaccine mandate, and we could be looking more like Texas and Florida.

Last thing first: Shafer should know that despite Newsom's lockdowns and mandates, California has the highest number of COVID deaths in America at over 65,000. Texas and Florida lag behind them.

The ex-fiancee is Alexandra Datig, who has endorsed Republican Kevin Faulconer in the recall election. Politico's Carla Marinucci first reported Datig's claims on August 19. What about the timing? California expected counties to begin sending mail-in ballots on August 16.

On Thursday, Marinucci returned to Datig, reporting she has filed a formal police report with the Los Angeles Police Department alleging that she was subject to “several incidents of domestic abuse” while living with Elder.