One of the regular tropes of liberal cable news in recent weeks is applauding how Big Tech is censoring any politicians or other leaders who are spreading misinformation about the coronavirus. They cheer when Sen. Rand Paul gets blocked by YouTube, for example, for questioning the effectiveness of masks.

But these same liberal cable networks are spewing wild misinformation about the coronavirus....when it comes to smearing conservatives and Republicans. You can call them murderers and terrorists, and the “independent fact checkers” and the social-media sites yawn and do nothing. These wild-eyed lies are somehow considered fair game. 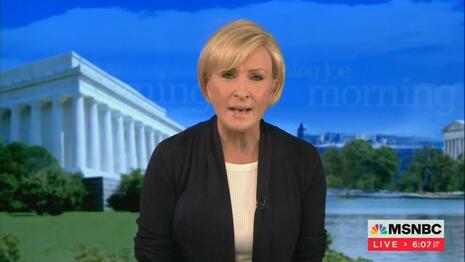 For example, on MSNBC’s Morning Joe on August 9, co-host Mika Brzezinski used the word “death cult” eight times to talk about governors like Ron DeSantis. She sneered that the Delta variant was the “DeSantis variant.” DeSantis has encouraged vaccines and worked to protect senior citizens from dying of COVID much more effectively than say, Andrew Cuomo.

But Mika implied DeSantis was comparable to Jim Jones, who forced 900 followers into mass suicide in the jungles of Guyana in 1978. On August 1, CNN’s Brian Stelter explicitly compared Trump to Jim Jones, and no one curbed Stelter on YouTube.

The next day, Morning Joe turned to its regular guest Eugene Robinson, a columnist for The Washington Post, who suggested DeSantis was killing his own supporters as a strategy.
“Sickening and killing your political supporters, [it] seems to me is the stupidest and most short-sighted political strategy I've ever heard of. Yet, that's what DeSantis is doing,” he claimed. “He’s insisting that pediatric wards fill with Covid patients. It is outrageous to say the least, and frankly, it’s criminal. It should be criminal.”

This was their 2020 playbook on Trump, that he was killing his own supporters.

It happened again on August 11, as Joe Scarborough repeated the “death cult” smear and attacked “parents saying 'we're going to ignore doctors, we're going to ignore science, and Jesus is going to take care of our children.' So we can act reckless medically,” he sputtered. “Do they think that Jesus decided to kill over 600,000 people with the Covid virus?”

Joy Reid unloaded the same garbage pail at MSNBC. On August 10, she smeared DeSantis: “[W]hat is the strategy behind killing children in your own state and letting children die of Covid?” She condemned “Governor DeathSantis” alongside “his partner in carnage, Texas Republican Governor Greg Abbott.”

On Reid’s August 11 show, her guest Malcolm Nance insisted the Republican Party were terrorists like ISIS, Al-Qaeda, and the Irish Republican Army.

It’s not only MSNBC that’s claiming Republicans are a pack of killers. CNN put on a Democrat strategist named Michael Starr Hopkins who proclaimed Republicans “basically want to turn Florida into a morgue.”

None of these targeted conservative leaders is someone who’s merely taking a position contrary to some public-health consensus. They are painted as consciously killing people, as murderers and terrorists. If you said anything like this about Joe Biden or Barack Obama or Nancy Pelosi, you’d be “fact checked” and censored.

But no one thinks an “independent fact-checker” like PolitiFact cares about these lies. Joy Reid hadn’t been checked since 2018, and that was rated “Mostly True.” The same goes for Joe Scarborough. Mika Brzezinski earned one check, one “Pants on Fire,” but that was 2014. Eugene Robinson has two “Mostly True” ratings. Brian Stelter has one “True” from 2015. Malcolm Nance and Michael Hopkins have no page.

All this underscores that the word “misinformation” is applied only to speech that liberals don’t enjoy. Wild smears about conservatives do not match the definition. Feelings trump facts.