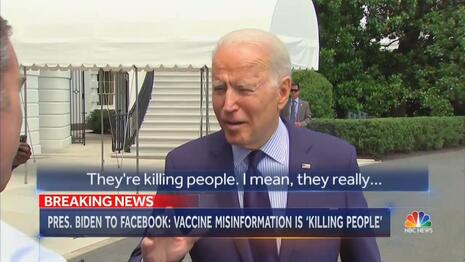 On Friday, NBC White House reporter Peter Alexander asked President Biden a softball question. “On COVID misinformation, what’s your message to platforms like Facebook?” Biden gave a wild-eyed answer:  “They’re killing people.” The president suggested Facebook’s a pile of killers, and on Friday night, the pro-Biden networks just blandly passed it along. Facebook had a statement denying they were killers, but there was zero political rebuttal or fact-checking.

Naturally, NBC was the most expansive. Reporter Gabe Gutierrez did note "Late today, Facebook fired back, saying it will not be distracted by accusations which aren't supported by the facts." The social-media sites offered statistics on how much COVID "misinformation" they removed -- which probably includes anything on the theory that the virus leaked from a lab in Wuhan, China.

NBC threw in a clip of Tucker Carlson on Fox before Biden's talk of killers. NBC's Brandy Zadrozny claimed "Good information is slow to come out, and bad information is really, really fast."

On the CBS Evening News, reporter Lucia Liliano passed along: "New cases are rising in all 50 states for the first time since January, as the president accuses social media companies of killing people for allowing vaccine myths to circulate online." Then, a brief rebuttal: "But Facebook is pushing back, saying they're saving lives by doing everything they can to combat COVID misinformation. Officials are warning the pandemic has reached a very dangerous state."

On the PBS NewsHour, anchor Judy Woodruff announced: "One of the reasons for stubbornly low vaccination rates is misinformation -- erroneous, or outright false information that may dissuade some people from getting a shot. The White House has been particularly focused on this, and the role of social media in allowing false information to spread. On his way to Camp David today, President Biden laid unmistakable blame on Facebook."

Like CBS and NBC, the PBS NewsHour calmly aired President Biden calling Facebook a pack of killers, along with a calm reading of Facebook's rebuttal. None of these networks offered a Republican critique or an "independent fact check." He's just allowed to blame everyone else. pic.twitter.com/601CxbLnEn

Despite leading the show with several coronavirus segments, ABC's World News Tonight somehow never mentioned Biden's remarks, like they were the only ones who found it embarrassing.