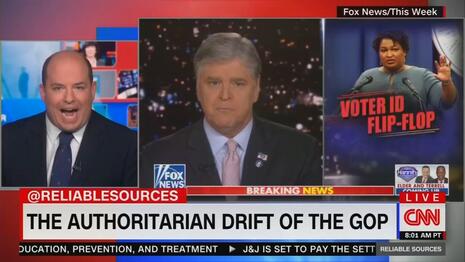 On Sunday's Reliable Sources, CNN host Brian Stelter began with a poisonous rant on how Sean Hannity goes on poisonous rants. In other words, Stelter argued Hannity is too angry for television, while being every bit as angry. As usual, Stelter insisted Hannity attacking reporters as "stalkers" is authoritarian, in a rant in which he denounced Fox News as poison.

Stelter claimed he watched Hannity all week, and it made him sick:

STELTER: To understand why so many Republicans have abandoned democracy, to see why so many believe the Big Lie, to get why so many are trying to rewrite voting rules, you have to hear the poisonous propaganda that the GOP's activist base is listening to. You have to really hear it. It's coming more from Sean Hannity than Trump right now. So, that's what we did this week. We watched every episode of Sean Hannity's show and we color-coded it as you can see. We focused on his language, the insults and phrases that he repeats every night. Nasty little words like these.

Stelter is known for using language every bit as "hot" as Sean. His show has put on "experts" who claimed Donald Trump was going to cause "many more million deaths" than Hitler, Stalin, and Mao combined. He's incapable of seeing his own "abusive" language.

He was upset Hannity painted Democrats as an "existential threat," and he calls Democrats "extremists." Mirror check?

And he says the media is a mob, full of, quote, stalkers. Just think on that for a minute. Fox claims to employ lots of reporters, but their primetime star calls reporters stalkers, to the idea of the news media as a check and balance, as a form of accountability, flawed but essential. No, no, no. On Hannity, the media is the enemy, even though Fox is the media.

Here's my point: don't get numb to this abusive language, because it is through these insults, it is through these attacks that Hannity yields power. This dark, dire language is fundamentally authoritarian. It softens the ground for movements like Stop the Steal, you know, Trump's ploy to actually steal the election. It portrays anyone who disagrees as not legitimate, as not American.

Stelter spent the entire Trump presidency claiming Trump had stolen the 2016 election with the Russians, that he was not a legitimate president, that he was an authoritarian, and that Fox was the enemy of the people.

Just a peek at last Monday's show puts Hannity in context: He was denouncing New York Times reporter Maggie Haberman for winning a Pulitzer Prize for reporting on Trump and Russia that was false. "You've now become a full-time Donald Trump stalker. You're not covering Joe Biden the way you cover Donald Trump."

Stelter can't address the syrupy softness toward Biden, the blatantly obvious media double standard. So he denounces the fighting words. He's "reliable" in avoiding any debate about why conservatives see the liberal media as toxic -- starting with how toxic they are toward conservatives.