Column: Victory for the Santorum Squashers 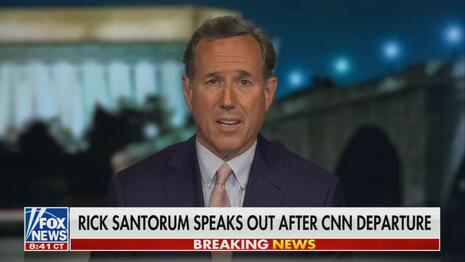 Rick Santorum’s gig as a CNN contributor came to an abrupt halt on May 22. Leftists on Twitter finally found a pretext for their crusade to rid CNN of this turbulent conservative. Santorum suggested in a speech on April 23 that America’s founding documents didn’t draw on Native American culture. This was enough for CNN to dump him.

The final straw was a designated apology tour of sorts on Chris Cuomo’s show on May 3. Santorum explained that he didn’t mean to disaparage the Native Americans, but nothing was going to stop the steamroller.

But say something that upsets left-wing Twitter? You have to go.

They exaggerated Santorum’s comments into what the Daily Beast claimed were “racist” and “pro-colonization” comments. This was some aggressive liberal listening. They twisted into Santorum’s message into “Whites made this country great, and nobody else historically matters.” It’s not what he said.

The substance isn’t the real issue. It’s all about the purge. The only “Republicans” that CNN wants any more are Biden voters like Ana Navarro, who tweeted out video of LeBron James doing a Latin dance and claimed it “is the best thing I’ve seen all day. Except for the news Santorum [is] no longer with CNN.”

Next up: the Left wants to fire Meghan McCain and make Navarro the resident “Republican” on the “The View.” Guess what? They tried that with “Republican” Nicolle Wallace, and it flopped.

But CNN doesn’t think conservative dissent could help with their terrible ratings. Any righty who dissents from the CNN party line vanishes. Whatever happened to David Urban? They apparently needed too many disclaimers for his lobbying work. (That’s the pretext.) Law enforcement analyst James Gagliano disturbed the Twitter lefties by daring to engage journalists on the notion of liberal bias. That’s got to be punished.

CNN contributor Scott Jennings is apparently the endangered species that remains, the snail darter or kangaroo rat of cable punditry. He should expect the Censor Squad is turning their attention to him.

Liberals like Tom Jones of Poynter.com underline that CNN viewers don’t like the “chaos” of actual disagreements on their television. “Santorum’s appearances often devolved into arguments and interruptions.” Yes, he was the outlier, the lone wolf. Jones added “I found it mostly uncomfortable, frustrating and chaotic — making it the very opposite of good TV.”

Anyone cheering the firing of Santorum better not come to the public square and decry how Americans “retreat to their silos” of one-sided news watching. Liberal journalists seem very comfortable building and reinforcing their one-sidedness, and regularly rain missiles on the conservative “silos,” even thought Fox News is more tolerant of liberals than CNN is tolerant of conservatives.

Today, the liberal bubble at CNN has a thicker wall than it’s ever had. Jeff Zucker has their “news” hosts dropping hourly editorial bombs on the Republicans and getting out their hankies to cry on camera over how the socialist revolution isn’t yet complete. Emoting is in, and reporting is out. Unanimity is in, and debating is out. Why would any conservative or Republican waste a moment on this never-ending infomercial, except to expose and correct it?