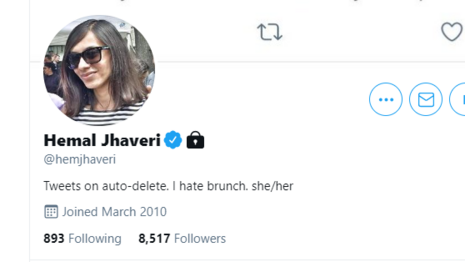 In the aftermath of the deadly mass shooting at a Colorado supermarket, some overheated leftists on Twitter insisted the suspect had to be a white guy. The surprise contestant in this ragefest was the "Diversity and Inclusion Editor" for USA Today Sports, Hemal Jhaveri. She tweeted: “It’s always an angry white man. Always.” We can't be inclusive enough to imagine it's possible it wasn't?

Jhaveri was fired. But she could still rush over to Medium and continue the thread that white supremacy is everywhere. "Inclusion" is a code word for making sure whiteness is always on the defensive.

This is not about bias, or keeping personal opinions off of Twitter. It’s about challenging whiteness and being punished for it. As a columnist and Race and Inclusion editor with our Sports Media Group, it was my job to push for anti-racism and inclusion in our stories and with our staff. That work can not be done without calling out existing power relations, often in a public forum.

USA TODAY, like so many other newsrooms, has been vocal about trumpeting its commitment to diversity, equality and inclusion. And yet, doing the actual work of diversity, equality and inclusion necessitates engaging with complicated structural issues that should make white audiences uncomfortable. In this case, after I made one mistake, the company contradicted their commitment to DEI and wilted upon criticism…

Sending one wrong tweet that ended up in the hands of Sean Hannity on Fox News though, was enough for this publication to turn tail.

So many newsrooms claim to value diverse voices, yet when it comes to backing them up, or looking deeper into how white supremacy permeates their own newsrooms, they quickly retreat.

She insisted others kept their jobs for worse offenses:

Meanwhile, white USA TODAY reporters have been able to minimize racialized people in print, our white Editor-In-Chief was thoughtless about black face, and a senior politics editor (also white) showed disregard for journalistic ethics by hosting a tax payer funded reception for Trump appointees. All kept their jobs.

John Sexton at Hot Air summed this up perfectly:

I don’t think Jhaveri should be fired because of angry reactions to her tweets. Never give in to the mob. But it is fair for her bosses to ask if her admittedly careless public statement is really compatible with her job. To be blunt, what she said is racist. Not all mass shooters are white and saying this is exactly as offensive as any other universal, negative stereotype about a particular race. Big surprise, no one wants to be associated with mass shooters because of their skin color.