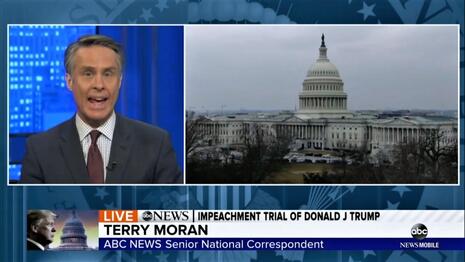 ABC anchorman George Stephanopoulos lived up to his Clintonista resume by praising the Democrats: “Terry, you can see the preparation and the care the Democrats have put into this presentation,  telling a story that goes far beyond those few hours on January 6th.”

TERRY MORAN: You sure can, George. Whatever you think of this case, they have risen to the moment. This is an atrocity in our history, an atrocity against our democracy, and the care with which the Democratic house managers of this impeachment trial have come prepared, their argument is organized, they are ringing the notes of patriotism and the emotion of the attack itself, and surrounding that with what they hope is an evidentiary trail from Donald Trump to that attack.

After weirdly claiming that questioning the constitutionality of impeachment after a president leaves office is like questioning the landmark civil-rights ruling Brown vs. Board of Education, Moran picked up the Hitler stick:

MORAN: The way that Republicans just aren't going to budge, whatever the nature of this argument, whatever the nature of the facts, is because I think we’ve heard it in these vivid videos that the Democratic house managers are playing –  Fight for Trump, fight for Trump, fight for Trump’– not fight for America. He has the Republican party as a personalized power like we haven't seen. It's a caudillo, it’s a Caesar, it's a Fuhrer, we don't see that in this country. We do now.

It's a little strange considering some rogue Republicans are voting and speaking out against Trump, which doesn't sound much like Hitler's Germany in action. But the media insist: you either agree with our plot, or you're like a Nazi.

This is rich coming from Moran, who seemed to be armed as a personalized power for Obama back in 2009, when he told Steve Krakauer at MediaBistro: "In some ways Barack Obama is the first president since George Washington to be taking a step down into the Oval Office. From visionary leader of a giant movement, now he's got an executive position that he has to perform in, in a way."

Fox's David Rutz pointed out Sen. Josh Hawley denounced Moran on The Faulkner Focus on Thursday morning: "I notice he used the word ‘fuhrer,’ of course, because the media can't go one second, the left-wing media, without comparing Republican voters to Nazis and comparing President Trump to Hitler. You talk about offensive and disgusting? That just shows you that's what this trial is about."