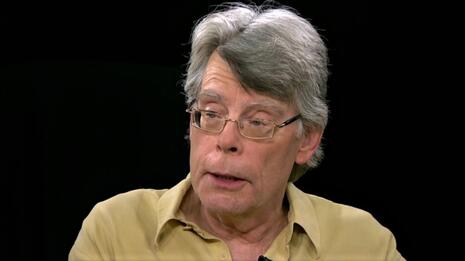 In Sunday's New York Times Book Review, leftist author Stephen King lauded a new novel called Afterland by Lauren Beukes, which is supposedly a "high-concept feminist thriller," or as King writes, "feminist in the sense that most of the men have been erased by a flu virus that develops into prostate cancer."

And they wonder why women decline the label "feminist" as man-hating.

King, somehow oblivious to the idea that he's male and would be toast in this scenario, concluded his review with this thought: "Think of a world where Donald Trump and Ted Cruz have gone to their reward, but Ruth Bader Ginsburg keeps on trucking. That doesn’t sound so bad, does it?"

So basically half the human race has perished, and "that doesn't sound so bad," because at least Trump and Cruz are gone.

In this feminist world, most of the men are gone, and the women are trying to keep it that way:

Cole is actually Nicole, and Mila, her 13-year-old hostage to fortune, is actually Miles, one of the few males left after Manfall has taken 99 percent of those carrying the Y chromosome. This is because of a pandemic — yes, that again — known as the human culgoa virus, or H.C.V.

Cole and Miles/Mila are trying to get to Florida, where they hope to find sea passage back to their home continent of Africa. There things may or may not be better (Beukes doesn’t go into that). They are being chased by the Department of Men, a kind of female Gestapo dedicated to a new law called reprohibition that basically forbids women to get pregnant by the few men still available to do the job. This might seem like a shaky proposition in a world close to becoming one sex only, but Beukes almost makes it sensible. Anthony Fauci isn’t quoted here — presumably the novel went to press too soon — but he could have been; essentially what the Department of Men is up to is flattening the curve. Or trying to.

Like most leftists, King thinks men are the lesser sex, as he concluded:

A few years ago, my son and I wrote a novel called Sleeping Beauties, which examined the other side of the situation Beukes envisions. In ours, all the women fall asleep and grow fairy-tale cocoons, leaving the men to carry on. It doesn’t turn out well. Things are better in Beukes’s story; even with 99 percent of the men gone, society staggers on, complete with government, nightlife, shopping — and a booming trade in fake baby bumps. Think of a world where Donald Trump and Ted Cruz have gone to their reward, but Ruth Bader Ginsburg keeps on trucking. That doesn’t sound so bad, does it?