Flashback: Did Chris Wallace REALLY Push Biden Hard? And What Came Next?

When President Trump complains about Fox News Sunday host Chris Wallace pushing hard questions on him, the natural curiosity is to go back and look at how Wallace pressed Joe Biden. He interviewed Biden on March 1, 2020, which was not a common occurrence. At the end, Wallace joked "Please come back in less than 13 years, sir."

The interview began with a lot of horse-racey stuff about battling Bernie Sanders for the nomination. Then he asked if the socialist Sanders could hurt the party down the ballot, and Biden in a vague way said Yes. Then came the bizarre part, when Wallace sounded just like a Chuck Todd. He insisted Biden was a "moderate," which Biden didn't really want to accept!

WALLACE: Mr. Vice President, if Sanders is such a threat to the Democratic Party and the possibility of Democratic majorities, should all of the centrists get together? You have a pretty clogged lane. There's you, there's Bloomberg, there's Buttigieg, there's Klobuchar.

Should you get together after Super Tuesday and however is in the lead amongst you, whoever has the most delegates, all the others say, we're going to get out and we're going to support this moderate to go one-on-one against Bernie Sanders?

BIDEN: You know what I mean, and I'm not criticizing you.

I'm making the point that I have a very, very progressive record and the issue is what we -- what can get done.

Wallace not only put "very very progressive" Biden in a "centrist" category, but Amy Klobuchar (ACU rating of 4.79 percent) and Michael Bloomberg, who rails against the menace of guns and fossil fuels and large containers of soda pop. That's not a "clogged" lane, it's a false category. Everyone in the primary field was landing to the left of Obama. Just because Bernie Sanders was very close to Venezuelan socialism doesn't make everyone else a "centrist."

Wallace did fact-check Biden in one question on his bizarre lie about getting arrested trying to see Nelson Mandela in South Africa. "You now say you weren't arrested and that it didn't happen in Soweto. You were at the airport in Johannesburg and you were stopped from going through the door for blacks. I guess the question is, were you confused or were you just trying to embellish a story?" 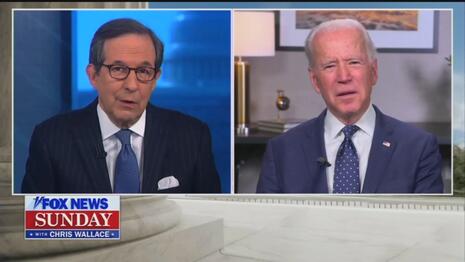 BIDEN: No. No, what I was trying to -- what I was doing was talking about the fact that I was strongly opposed to apartheid. When we landed and -- we were going to Soweto actually. We landed in Johannesburg and the Afrikaners took me off the plane and took me into one direction, wanted me to go through a white-only door, and in fact, I wouldn't move. I said everybody else is going through another door, I'm going with the -- with the black delegation that I came with.

They said, no, you can't. And I said, I'm staying here, I'm not going to move. And they would not let me move anywhere so I guess I should have said, I was -- I was detained, I was not able to move forward.

When Biden then insisted he was tough on apartheid, Wallace conceded, "no no, your record is clear."

ABC, CBS, CNN, MSNBC, NBC and PBS all failed to air or note this Soweto tall-tale exchange after the Fox News Sunday interview. There were no stories hailing Wallace for an "A-plus accountability interview." Chris Wallace is only making news when he's challenging Trump, not Biden.