Reporter Rips Susan Rice: Not the 'Best Messenger' for a Tough Russia Policy

Meet the Press substitute host Andrea Mitchell wanted to hammer the Russian-bounty issue on Sunday and brought on Susan Rice, the Obama national security adviser best known for lying on five Sunday shows about the terrorist attack on our consulate in Benghazi. It wasn’t a shootout at Credibility Gulch.

Mitchell asked softball questions, beginning with this: "The president has now referred to this as a hoax. What message does that send to Vladimir Putin?"

Rice was playing hardball, since she's considered on the list of potential running mates for Biden, despite the fact she's never run for anything and....well, lies very easily on national TV.

ANDREA MITCHELL: Why -- if this intelligence was important enough to have an inter-agency meeting on it and it be in the presidential daily brief, as you point out, February 27th -- why did he subsequently have six phone calls with Vladimir Putin, and didn't raise this issue, and nobody briefed him that he should bring the issue up?

SUSAN RICE: Andrea, it makes no sense. None of this adds up. And if, in fact, the president is surrounded by such cowards and incompetents that even when he's trying to invite Putin into the G7 and has these six phone calls nobody has the guts to say to the president of the United States, "Mr. President, we still, I want to remind you, have credible intelligence that the Russians are trying to kill U.S. servicemen and women in Afghanistan. This is not the time to be handing Putin an olive branch. This is the time to be working at options to punish him." And yet, that's not what happened. So, you know, this is really extraordinary. We have a president who's doing our arch adversary's bidding, it would seem, and he's surrounded by sycophants and weaklings who aren't doing their jobs, who don't have the confidence in themselves and in the mission that they are there to carry out, to bring the president the tough messages he needs to hear.

Yahoo News reporter Michael Isikoff, who has himself written a book attacking Trump's moves on Russia, suggested Rice wasn't the ideal spokesperson for this gig, and linked to an excerpt from that book about how some aides were working up aggressive options to counteract Putin and infuriate him:

One day in late August, national security adviser Susan Rice called [director of cybersecurity Michael] Daniel into her office and demanded he cease and desist from working on the cyber options he was developing. “Don’t get ahead of us,” she warned him. The White House was not prepared to endorse any of these ideas. Daniel and his team in the White House cyber response group were given strict orders: Stand down. She told Daniel to “knock it off,” he recalled.

Daniel walked back to his office. “That was one pissed-off national security adviser,” he told one of his aides.

But Andrea Mitchell knows her record, and set her up with softballs anyway, like a good Democrat: 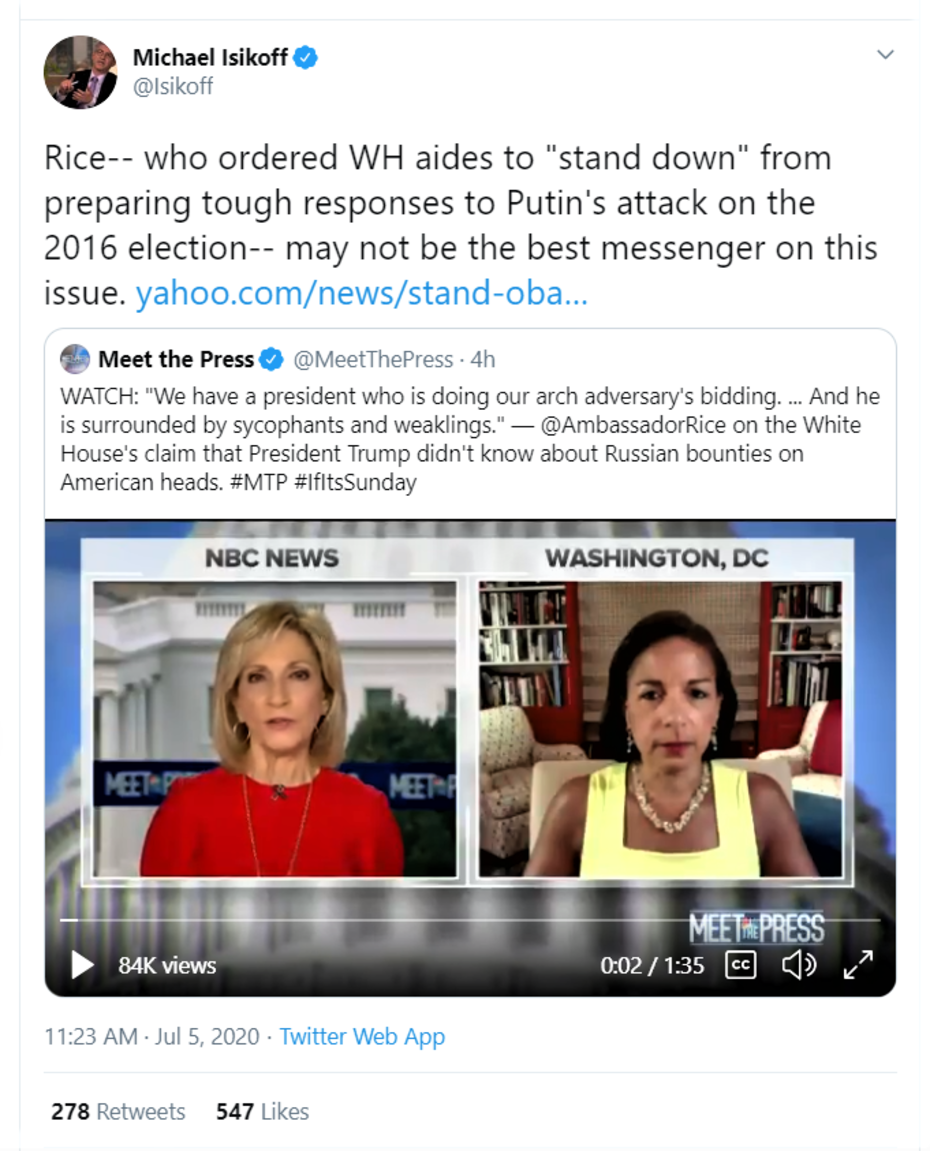 MITCHELL: Let me ask you about the president's rhetoric this weekend, going after his enemies, what he terms his enemies, the news media, protesters and also a new ad that they have come up with against Joe Biden on defunding the police. Let me watch.

FEMALE VOICEOVER: For all other crimes, leave your name and number and someone will get back to you. Our estimated wait time is currently five days.

ANDREA MITCHELL: That misstates Joe Biden's position because he is also against blanket defunding of the police. But what about the president's rhetoric on race?

Rice sounded exactly like the newspaper reporters, that Trump showed in his Independence Day speeches he "was going to stake his legacy and his campaign on preserving Confederate monuments and the relics of slavery, rather than uniting this country at a time when we need it so badly, rather than laying out an agenda for a second term."

All this was brought to you by IBM and Verizon.