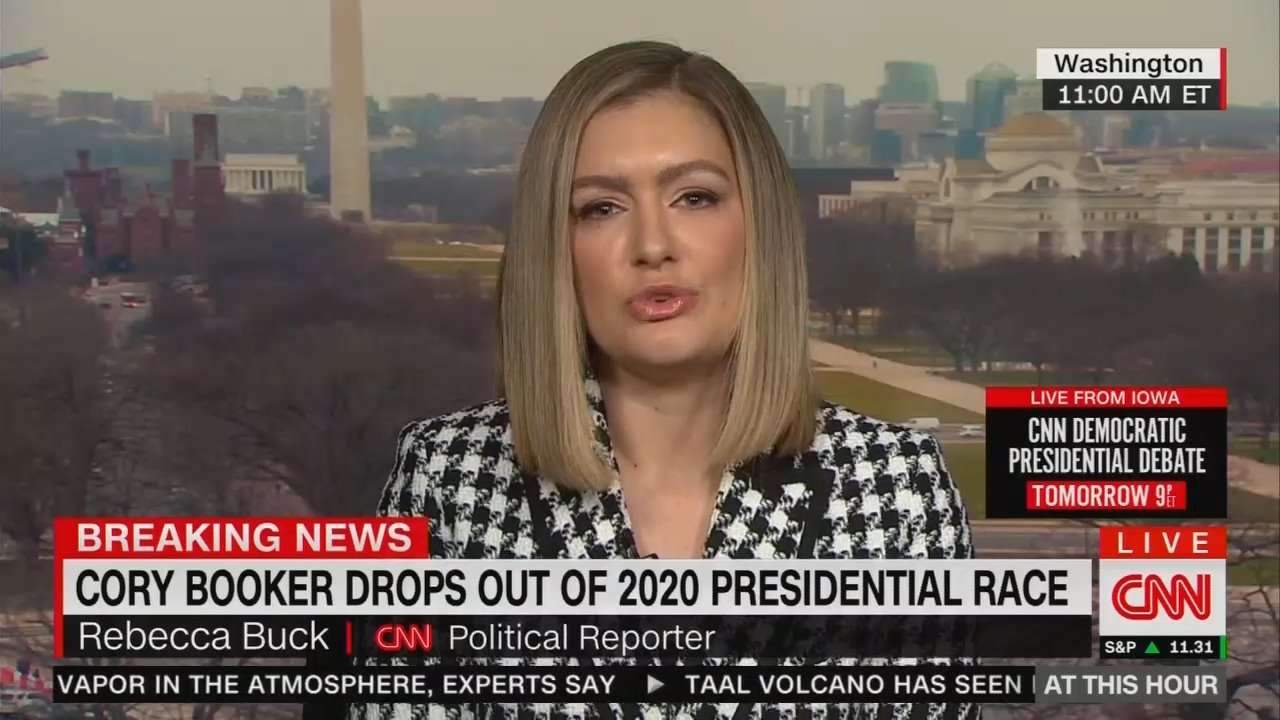 A journalist getting assigned to a second-tier presidential candidate should probably be upset at the assignment, as far as their career aspirations go. But CNN reporter Rebecca Buck -- who had turns at BuzzFeed and the Washington Examiner -- concluded her term as Team Zucker's embed assigned to Cory Booker's campaign with a flourish of superlatives in a 15-part Twitter thread. He's morally earnest! He's loving! He made people cry! He's like Oprah!

These were the first five tweets in the thread.

1. Rachel Maddow, who knew Cory Booker from their Stanford days, summed him up perfectly in Feb last year. She said he “is so different than anybody I have ever known on earth” and “such an absolutely unique embodiment of moral energy and moral earnestness.”

2. At the time, I thought that sounded hyperbolic. But as I covered Booker more and spent time with him and his campaign team, I discovered it wasn’t. He is unlike any candidate, maybe any person, I’ve ever encountered.

3. Booker wanted to win, but there were limits to what he would do to achieve that end. He resisted attacking his rivals, even if it might have been to his benefit. [Except for Trump, not to mention his "evil" Supreme Court pick.] And he didn’t deviate from his core message of love and building a “beloved community.”

4. Inevitably, some people viewed Booker’s earnest message with skepticism. Like, Is this guy for real? It might be why Booker often converted people into supporters at campaign events, when they could see his conviction and passion for themselves.

5. Booker’s campaign events were also unique. Possibly due to his past success on the paid speaking circuit, they often felt more like TED Talks or sermons. People cried! He cried! It was Oprah’s presidential campaign without Oprah.

Buck added that "Reporting on Booker was challenging in a weird way. Although he was accessible to the press, and happy to answer questions, he wasn’t interested in making news for news’ sake — probably to his detriment." She added "it was also fun," like when Booker made everyone sing along to "Born to Run," because "He was always like this — singing, yes, but also incomprehensibly upbeat."

As often happens with CNN, it's hard to distinguish between the reporter and the Democratic candidates and operatives. Buck oozed that Booker's staffers didn't pick a winner, but they "stuck with him because they truly believed in their candidate."

12. They also believed in what he was trying to do, which was ultimately pretty simple. Booker viewed the presidency as a moral post from which to inspire and heal the country. He was running for “spiritual reasons,” he said in Iowa recently.

13. Maybe that was too esoteric for most voters, or they were too risk-averse in this cycle to choose someone like Booker. Or the media didn’t give him enough attention. Or all of the above. See any number of why-he-didn’t-take-off thinkpieces out there.

On Monday, Buck appeared on CNN as the Booker surrender was announced: "He never had a breakout moment....He had a consistent message of love, of community, of mending the moral fabric of America, but it wasn't something that voters ever responded to."

If only a fraction of Democrat voters responded with the passionate ardor of CNN's Rebecca Buck.