Vanity Fair is a reliable glossy partner with the Democratic establishment. Take the latest from Peter Hamby, who covered politics for CNN from 2005 to 2015 before scoring a gig doing news for the youngsters at Snapchat. His latest article carried a headling full of angst:

Trump wants to drop a nuclear bomb into a hurricane, immigrant children are dying in U.S. custody, and the Amazon rainforest is burning. With the stakes so high, why is the press still assigning so much news value to gaffes?

This is a classic trope of the press in the Age of Trump: Anything the Democrats do wrong should be downplayed, because to emphasize it would be to "trivialize" the threat that is Trump.

Hamby criticized the media elites for making a story out of Biden clumsily asking voters to imagine if Obama had been assassinated. 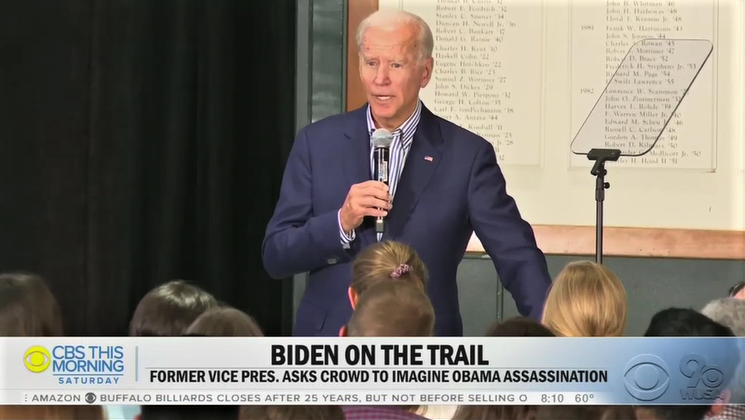 “Biden has long been prone to gaffes and misspeaking, another aspect of his candidacy that has come under scrutiny during his latest presidential run,” wrote the Associated Press.

And there it was: This was a gaffe story, and Biden is the gaffe candidate. Never mind that he’s been making gaffes his whole political career, that it’s baked into his political identity. His verbal flubs might even be one of his most endearing strengths for voters who crave authenticity.

But these gaffes have now apparently “come under scrutiny,” which really just means his gaffes are being chronicled by reporters who go into his every event hunting for the latest gaffe. As the linguist Steven Pinker said in 2008, “Political coverage, when it’s not the horse race, is just gaffe-spotting.”

Hamby also turned to Carl Cameron, the former Fox correspondent, who it turns out was quoted in the Vanity Fair headline. “The idea that Joe Biden has loose lips is as old as Biden himself,” Cameron said. “The problem for the press is that Trump says so much more stuff, all the time, and the ratio is just beyond description. He makes what we used to cover as gaffes look meaningless. So are we really going to have a gaffe-fest over Joe Biden?”

Hamby also turned to a top editor at Time Incorporated:

“In the Trump era, gaffes should be weighted differently because he isn’t just a monumental liar, he's also a 24/7 gaffe machine who displays a complete ignorance of geopolitics, history, global economics, you name it, on a regular basis,” said John Huey, the former editor in chief of Time, Inc. “But while the media is now inured to his barrage of misstatement, it’s still news when Joe Biden mixes up Vermont with New Hampshire in a campaign speech, or confuses some time sequence of events. To ignore these mistakes leaves you open to charges of bias, but it creates a genuine double standard dilemma. This isn’t going to change. For Biden, the only solution is to try harder to avoid his lifelong gaffe habit, but to embrace it with humor when it occurs. No one is going to stop reporting it.”

Biden’s gaffes really only showcase what we’ve known about him for a long time—that he makes gaffes. Compared to the horror show coming out of Trump’s mouth on a near-daily basis, who cares?

The endurance of the gaffe, its refusal to die in the Trump era, is a worrisome signal as the press careens toward 2020.... The public discourse is too clogged with phony sanctimony and performed outrage—how’s that SoulCycle boycott going?—for news organizations to abandon their role as gatekeepers of logic, reason, and context. Maybe it’s quaint to hope, but newsrooms today might consider being more deliberate about what they choose to call a scandal or controversy or a gaffe, instead of playing to the internet crowd with clickbait and outrage porn. Editors must have the confidence to look at a story like Biden’s assassination riff and say, No, that’s not news, not anymore.