On NPR Monday, Fresh Air host Terry Gross spent 35 minutes with Washington Post reporter Greg Miller, promoting his book The Apprentice: Trump, Russia And The Subversion Of American Democracy. She wanted to know if they could accuse Sen. Mitch McConnell with treason: 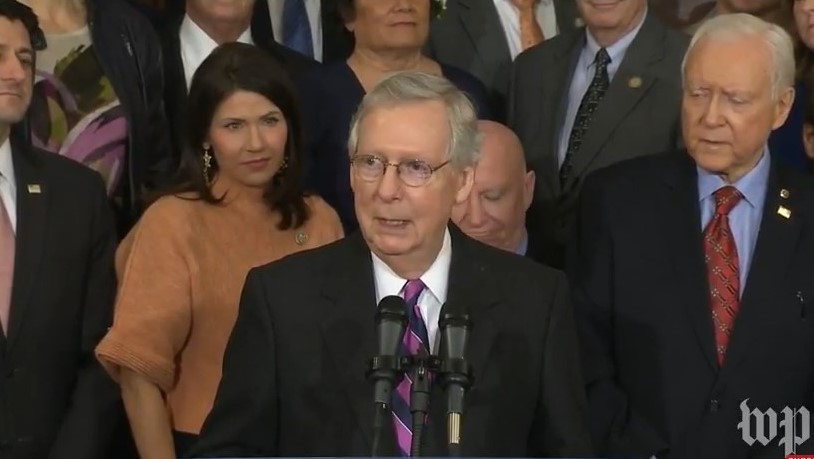 TERRY GROSS: ...meanwhile, John Brennan - who is trying to convince [Mitch] McConnell, look, Russia's interfering in the election, and McConnell is saying, oh, yeah, if you say that publicly, I'm going to say you're interfering in the election. So Brennan recently lost his security clearance, and McConnell is still the Senate majority leader. I'm wondering - and I don't know if you can answer this at all - but if it can be proven that McConnell knew that Russia was trying to interfere in our election and influence the outcome of it and then tried to cover it up, to deny that it was happening, is that treason? Is that, like, legally treason?

MILLER: I don't want to use words like treason. But I write about many cases that are really distressing, that tell us that we're in a different political era than anything we've - that we've seen in this country for a long time, where political imperatives, where loyalty to party or party considerations, seem to overwhelm everything else, including the concern for the country and its core institutions. I mean, what's more core than an election, an election for a president of the United States? What is more deserving of protection and putting above all party considerations than that?

And yet, we see numerous cases through this period in which, when senior officials learn about this - and I think Mitch McConnell is one of them - their impulse is to protect their party interests, to try to protect the prospect of a Trump victory over the sanctity of the election itself. I mean, it's a troubling thing.

Liberals get very upset when Trump accuses someone of treason, but they lob the T-word a lot.

Since when has NPR been so nationalistic? Just last December Terry Gross's show was typically promoting radical leftist Daniel Ellsberg as he gabbed of his affinity for Bradley/Chelsea Manning and Edward Snowden for leaking national secrets:

"I identify more with Chelsea Manning and with Edward Snowden than with any other people on earth. We all faced the same question which is, who will put this information out if I don’t?" -Daniel Ellsberg, who leaked the Pentagon Papers in 1971

Ten years ago, Gross was sympathizing with Pentagon bomber Bill Ayers, who is arguably more treasonous than Senate Republican leaders. But Ayers was sympathetic next to that mean-spirited Sarah Palin: "when Sarah Palin started talking bout how Obama was palling around with terrorists, meaning you, did you start getting a lot of death threats?" Later, she repeated it: "When you were getting those death threats, did you think at any point that the McCain-Palin campaign had crossed the line into irresponsibility?"