The abortion-pushing feminists at Cosmopolitan grabbed actress Alyssa Milano for an interview on her reactions from sitting in the hearing room during the Kavanaugh-Ford hearing, or as their headline put it, "Being In the Room with Kavanaugh's Rage." 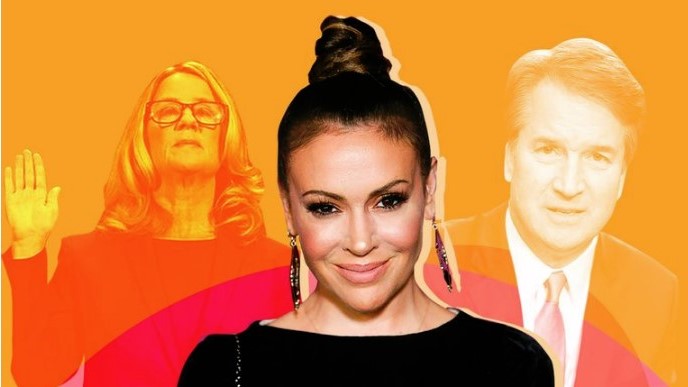 I couldn't see his face. All I could see was him pouring water and his back moving up and down as he breathed really deeply, almost like an animal.

But I could hear him—his anger and his rage. And I could feel it.

Kavanaugh was so volatile and emotional. I was just sitting there thinking to myself, If a woman had acted like this during a line of questioning, she would be considered totally unhinged or hormonal or accused of having a meltdown, or worse, of being a bitch. So watching him, I just felt like, this guy does not have the temperament to be on the Supreme Court, regardless of the allegations. [Emphasis hers. Image is Cosmo's.]

Kavanaugh was breathing deeply, trying not to break down about all of the support he drew from his lifelong female friends. But she can't recount it that way. She can only write about how she's going to work to impeach Kavanaugh:

It was all so emotional. I was sitting next to Senator Kirsten Gillibrand, and at one point she passed me a tissue. I rubbed her back. It was a moment of solidarity for the women who were present. It was heavy.

I think if the testimonies were swapped—if Kavanaugh had gone first and we had left after Dr. Ford's testimony—I would have felt better. But when I left, I felt total defeat.

I completely and totally understand that the worst fears of sexual assault survivors have been realized.

Milano's best gig these days is hosting the fashion-designer reality show Project Runway: All Stars, but she is acting in the Netflix series Insatiable. She's also working on her own TV-movie titled Alyssa Milano for Mayor.