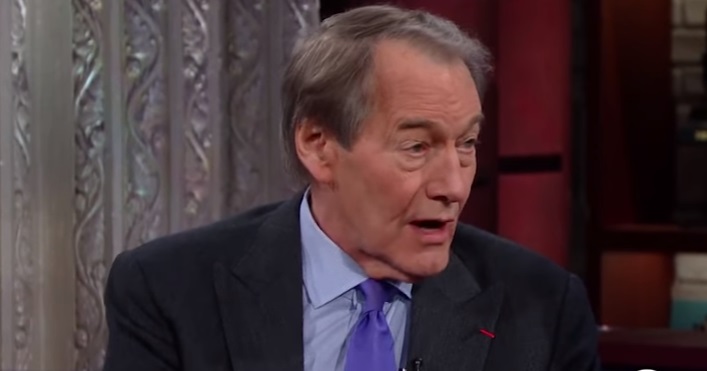 Lawyers for CBS News are aggressively distancing the "Tiffany network" from the #MeToo sleaze factor, demanding that they be let out of the lawsuit filed by three women who accused Charlie Rose of sexual harassment. Three former female staffers, all in their mid-20s, claimed Rose “subjected Plaintiffs to repeated, ongoing and unlawful physical and verbal sexual harassment.”

CBS insists they aren't responsible for any of their morning anchor's "Crusty Paw" behavior toward employees...because they weren't CBS employees:

In a new filing obtained by The Blast, CBS News filed a motion to dismiss all claims against them in the case, saying they did nothing wrong.

The network explains that following the Washington Post article that reported Rose engaged in misconduct, and his admission that he engaged in “inappropriate behavior,” CBS News terminated his employment as an anchor and correspondent for the network....they claim none of the women have lawful claims against them. They claim it is this simple: “CBS cannot be held liable for Rose’s alleged misdeeds.”

CBS claims that none of the women even brought the alleged conduct to them, at least not until long after they terminated Rose.

The women complaining about harassment at Rose's hands worked for his nightly PBS talk show, and even in that case, they weren't technically employees of PBS or their New York city superstation WNET, but of Rose's TV production company.

Also on the #MeToo beat, Mediaite reports that the Daily Beast has more dirt on NBC News to reveal on how they tried to squelch Ronan Farrow's probe of Harvey Weinstein...or more dirt on Matt Lauer?

The mood at NBC News was one of surprise at the Beast’s new report on Farrow, with some relieved it was not the devastating story they expected, one network source said. That optimism might be misplaced: Mediaite learned the Daily Beast has spoken to close to 100 sources at NBC News for a broader report on misconduct at the network that has been in the works for months.

“There’s more to come,” a source with knowledge of the Daily Beast’s reporting told Mediaite after the release of its story on Thursday. “A lot more.”