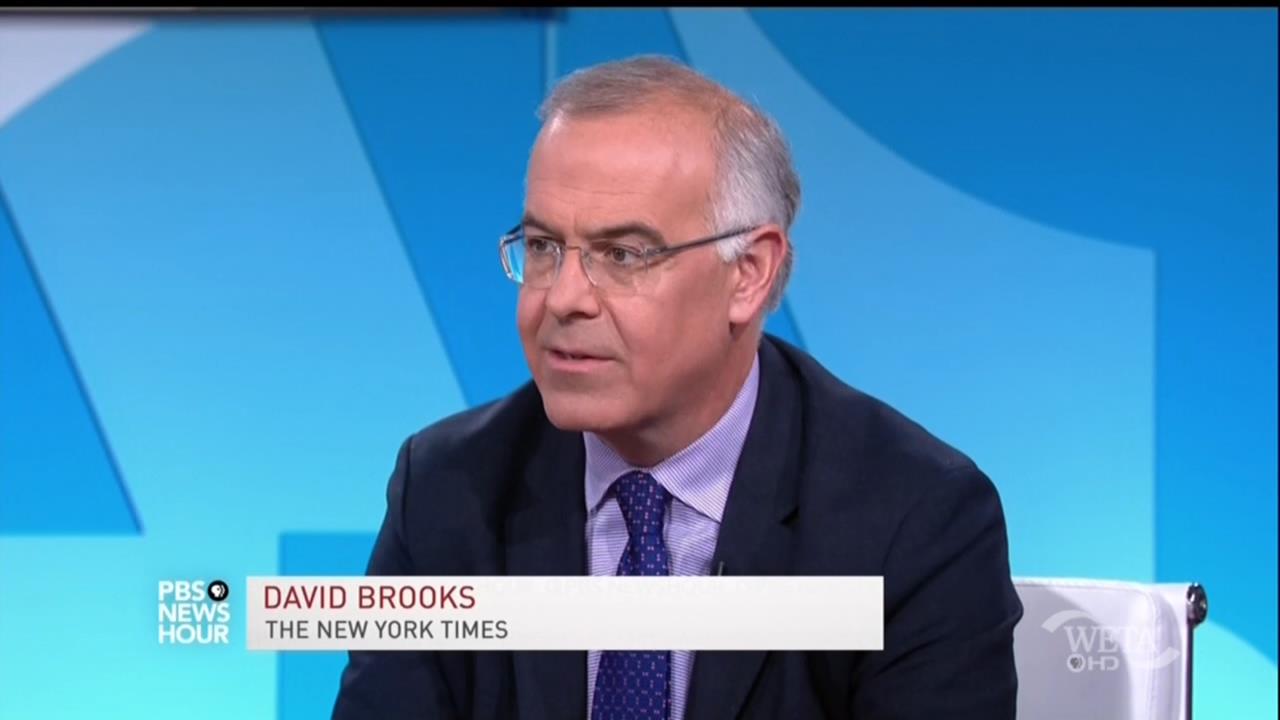 Sadly, if not surprisingly, the analyst was the "right-leaning" pundit on the PBS NewsHour, New York Times columnist David Brooks. Stupid white males are voting for stupid white males. Now if Brooks had uttered a version of this in 2008 -- that blacks were just voting for their "gene pool" -- he would have been drummed out of the media elite. But mocking those uneducated whites doesn't ruffle a feather at PBS. Anchor Judy Woodruff didn't blink for one second at this performance:

And, basically, less educated or high school-educated whites are going to Trump. It doesn’t matter what the guy does. And college-educated going to Clinton. Everyone is dividing based on demographic categories. And, sometimes, you get the sense that the campaign barely matters. People are just going with their gene pool and whatever it is. And that is one of the more depressing aspects of this race for me.

Brooks is obviously voting for Hillary Clinton. He closed the segment by cracking wise that "I can’t say who I’m going to vote for, but one person is clearly disqualified for that job. And I can’t mention his name." That's smart politics for his career, considering the liberal media outlets he works for. But can't he consider there are many people who aren't voting against Hillary Clinton simply because of their "gene pool"?

Speaking of disqualifying Republicans for office, liberal analyst Mark Shields grew really animated at the thought that Republicans won't confirm a Supreme Court nominee. He was so worked up he called it "criminal." Once again, no one at PBS found this a little overwrought. Brooks said he felt even stronger than Shields.

JUDY WOODRUFF: Mark, we have heard from Republican senators in the last few weeks that they’re, no matter — if Hillary Clinton is elected — this is an if — no matter who she puts forward, they’re going to make sure that she doesn’t get to fill that last — that ninth seat on the court. How are we to think about the Supreme Court anymore? We have now gone the better part of this year, since Justice Scalia’s death, President Obama’s nominee can’t get through. Has this become a litmus test of the litmus test?

MARK SHIELDS: Judy, in a year of irresponsibility, this is a new depth of irresponsibility. To say that the constitutional mandate of a national election, where millions of Americans vote and pick a new president, that that president is — what that president does, and under the Constitution, of nominating judges and justices, is somehow moot, and I’m not going to pay any attention to it, that’s unacceptable. It really is. It’s beyond irresponsible. It’s beyond reckless. It is really — I think it’s criminal. I basically do. And anybody who holds that position, I think it’s self-disqualifying for any public office.

On so many issues discussed on the NewsHour, there is no one to make even a rhetorical case against the Left, that the Supreme Court itself is acting in contempt for its constitutional norms, with its bizarre contortions to uphold Obamacare as one easy example. It's easy for them to post segments tsk-tsking "rancor in the electorate" when everybody on the set is unanimously voting for Hillary against that less educated "gene pool" that doesn't watch or pledge to PBS.