On PBS, Scribes Gush for Hillary's 'Even More Ambitious' Climate Plan Than Obama 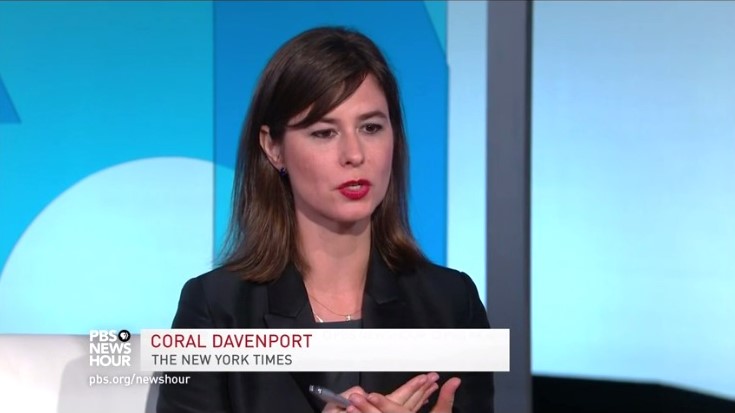 On the surface, it might seem quite straightforward and objective to ask two reporters to assess the two candidates on their “climate change” policy approaches. But on Wednesday’s PBS NewsHour, the reporters were not at all objective. They were Chris Mooney of The Washington Post, who was hired after he wrote the transparently ideological book The Republican War on Science and The Republican Brain: The Science of Why They Deny Science — and Reality. Then add Coral Davenport of The New York Times, who is a regular recycler -- of green scenarios of doom: “Without the Paris climate policies, the planet is headed toward a far more destructive temperature increase of more than 8 degrees Fahrenheit.”

When asked about what a President Trump would do, Davenport said he could ruin the "landmark accord" in Paris to reduce emissions: "The Paris agreement was a landmark accord reached last year in Paris which for the first time joined almost every country on Earth, over 195 countries, into committing to taking actions to reducing their carbon emissions. It was key for the U.S. to be a centerpiece of that."

So "If the U.S. actually were to pull out of the Paris agreement, the deal could potentially unravel. And so the question now is, what would happen in a Trump administration? And the rest of the world, led by U.N. Secretary-General Ban Ki-Moon, is trying to kind of figure out, well, how do we keep the Paris accord intact if there were to be a President Trump?"

Mooney insisted Team Obama and other eco-socialist bureaucrats are trying to fast-forward treaty implementation so that Trump couldn't undo it. Then the PBS anchor asked about Hillary Clinton, and the reporters were much happier. They expect she'll be even more extreme than Obama in fighting industries like coal. Davenport even praised Hillary for openly talking of crumbling coal-miner jobs:

WILLIAM BRANGHAM: All right, crystal ball is in your hands now. January 2017, Hillary Clinton is inaugurated. What does energy policy look like? 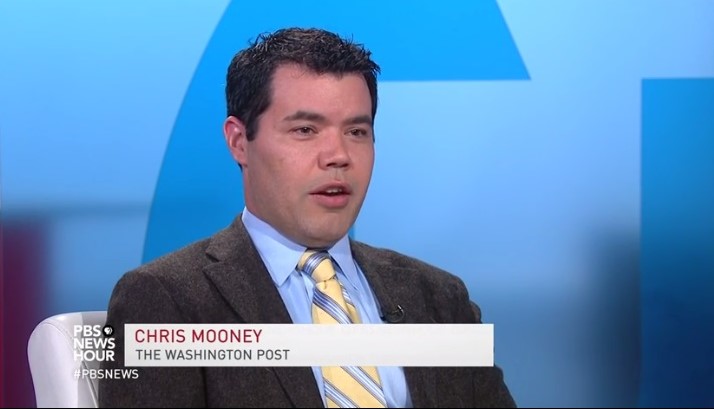 CHRIS MOONEY: I think it looks like a pretty strong continuation of Obama climate policy. I think absolutely you would be fulfilling the Paris climate agreement and trying to reduce U.S. emissions. And the goal is to get them 26 to 28 percent below 2005 levels by 2025.

And then there’s going to be a process where we ratchet up and try to make it even more ambitious. I’m sure President Clinton would be very much on board with that. I think, domestically, one of the most interesting things that you would see under President Clinton is going to be the big energy infrastructure transition. How much solar can we install? How do we integrate it onto the grid? How much of a role is natural gas still playing as coal dwindles? Those are going to be the kind of real issues during the Clinton years that are going to determine how much the United States puts into the atmosphere.

WILLIAM BRANGHAM: Coral, I know you have been following this somewhat. Hillary Clinton got into some trouble when he said, as we make this push to renewables, coal jobs are going to be lost. Now, she has put out a big proposal to say, I’m going to beef up renewables, we’re going to try to save some of those jobs. How realistic is that?

CORAL DAVENPORT: It’s interesting to see Hillary Clinton, even if it didn’t come out quite the way she meant it to, openly acknowledge that climate policy really does direct take aim at coal. Burning coal for electricity is the largest source of planet-warming emissions in the U.S. So if you’re trying on stop global warming, you’re going to take aim at coal. That means eventually the coal community, coal miners, the coal-fired power plants, are going to get hurt.