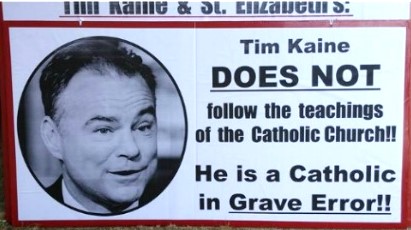 One of the "Most Read" articles on The Washington Post website is an Aaron Blake story headlined "Donald Trump has a massive Catholic problem." He's losing to Hillary Clinton among (self-professed) Catholics by 27 in an ABC-Post poll. Here's one reason: the Post hasn't written about Sunday's protest outside Tim Kaine's Catholic church in Richmond calling him a Catholic In Name Only.

According to the Virginia Christian Alliance, the Post had a reporter present, but there's nothing about it on the website on Monday morning.

Press releases were sent to approximately 40 news media, such as the Richmond Times Dispatch and television stations but only 2 showed up and none from Richmond: Washington Post and TV 29 of Charlottesville! (thanks for coming!).  Richmond reporters are avoiding Tim Kaine's dark side including his violation and disobedience to the core beliefs of the Catholic church. Will Richmond reporters not cover Kaine's dark side?  Kaine's church is located at 2712 2ND Avenue, Richmond, VA.  and the Richmond Times Dispatch is at 300 E. Franklin, less than 3 miles away.

A reporter showing up to observe does not mean much if they never report on it. Instead, Post readers are just chewing over Aaron Blake underlining "Catholics have long been a swing vote in presidential elections, and right now they’re swinging hard for Clinton. It’s also hard to overstate just how significant Trump’s poor performance among Catholics is." 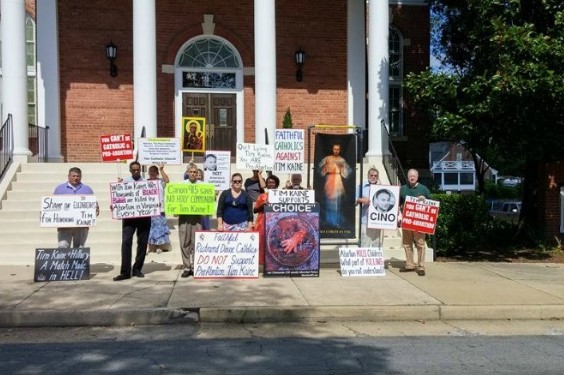 As you can see, the number of protesters looks to be about ten, so a reporter could dismiss it as news due to size. There's just one problem with that: liberal media outlets don't care about protest size when they like the protest. See Cindy Sheehan, for example. Or to focus only on the Post, they ran more than 10,000 words gushing about three law-breaking, blood-throwing radical-left anti-nuclear protesters and called them "servants of God."

So maybe these anti-Kaine protesters should have thrown blood on the church walls or broken a few stained-glass windows? (Well, not if they're faithful Catholics.) Catholics can also recall how the Post only needs one lesbian denied Communion to have a front-page hissy fit.

In other words: Tim Kaine has exactly the same Vatican-rejecting social beliefs on homosexuality and abortion as the secular reporters and editors of the Post. So they think: Hey, what's the controversy? No, the top story on the front of today's Post is hammering Hillary Clinton for not moving fast enough on the gay agenda when she could have.

That's how the Post defines "balance." What a liberal rag.