The Washington Post Gushes In Love Over Obama First-Date Movie

The Washington Post is unsurprisingly in love with the new Obama-puffing film about Barack and Michelle’s first date. Movie critic Ann Hornaday won the prize for the biggest gush, comparing Obama to young Abe Lincoln:

Like the warm summer day it chronicles, Southside With You possesses a mellow, languorous vibe, an infectious easygoing charm that insinuates itself gently, then seductively, as the couple at its center experiences the stirrings of what might be true love.

That the two young people in question are named Barack Obama and Michelle Robinson almost feels like an afterthought in Richard Tanne’s modest but enormously enjoyable throwback of a movie. Imagine a cross between John Ford’s Young Mr. Lincoln and Richard Linklater’s Before Sunrise, and you get a sense of the tone of a movie that tiptoes to the edge of hagiography but never falls in, at least entirely.

Hornaday's comparing Obama to Lincoln, so maybe she's not the best judge of what's a hagiography. She then quickly said Obama's "pathological haters" won't want to see it, and links to fellow partisan Post hack Petula Dvorak trashing the hatred (obviously racial) of Obama critics. 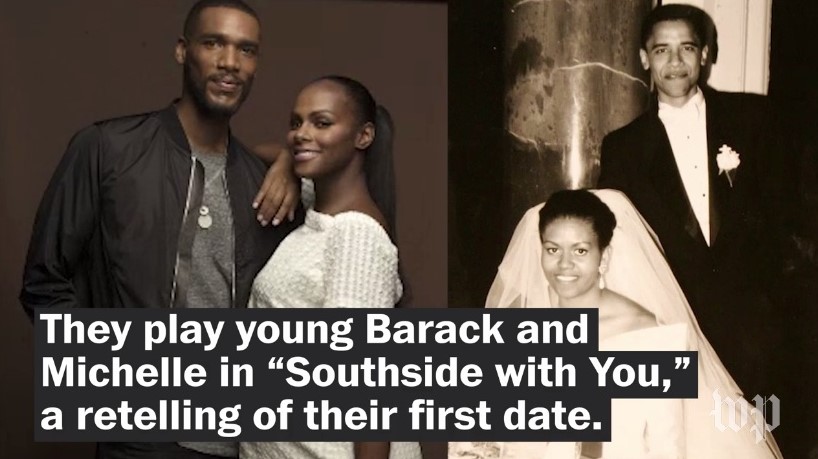 It’s unlikely that Obama’s most pathological haters will want to see Southside With You, but they’ll be missing a delightfully low-key portrait that is as universal as it is grounded in a well-chronicled public-private life....Michelle and Barack’s discursive, ambling date takes on the contours of romantic destiny as, to quote Rilke, two strong, self-identified solitudes tentatively reach out to protect and touch and greet each other.

Hornaday hails Tanne for making "an impressively sensitive feature debut," and she's fine when Tanne creates events that didn't happen on the first date, so Obama can give brilliant speeches:

Although the filmmaker has taken the slight liberty of inserting an organizing meeting where it didn’t literally exist on the day, the license gives him — and, more crucially, Michelle — a chance to see Barack in action, delivering a brilliant extemporaneous speech on the need for mutual understanding and the inherent messiness of democracy.

Hornaday surely knows that the "haters" object to the idea that Hollywood doesn't just serve as the ATM for the Democratic Party, but that they make gushy propaganda like this to add historical (ahem, fictional) luster to their politicians. Her review said this flick is just the first of many, and her ending is really puke-tastic:

Southside With You is the first of what will surely be a spate of mythmaking movies about the Obamas as they prepare to leave the White House. But seen through another lens, it’s about anyone who has experienced the mystery of discernment, and heard the whispers of a still, small voice that cannot be ignored.

The film was also puffed on the front page of Thursday’s Style section, as writer Monica Hesse also compared it to the chatty-lovers film Before Sunrise.  Hesse toyed with how real this movie could be, since all the dialogue is imagined, not real.

Hesse reported the moviemaker Richard Tanne began working on the script even before Obama had won the 2008 election, after watching how the couple interacted: “The way they’d look at each other, flirt with each other, how authentic and sexy their love seemed to be,” he proclaimed. “It’s rare in regular people, and even rarer in public figures.”

At least there was this memorable passage about how your politics would shape your reading of the movie:

Does this feel like the Obamas? An early prototype of them. Whether you find movie-Barack inspirational or a tad smug probably will reflect how you view the man. The same goes for ­film-Michelle, who is considerably more severe than the real first lady — and who will come across, to different viewers, as either her future husband’s brilliant rock, or as the woman who will one day tell the country to stop eating so many Ding Dongs.

Post culture blogger Alyssa Rosenberg gave a nearly opposite take to the Hornaday treacle, and even referred to this blog:

Conservative media critics have been grumbling about “Southside With You,” Richard Tanne’s movie about Barack and Michelle Obama’s first date, for nigh on two years now, complaining that the film represents an entertainment industry in thrall to the first couple. And so the folks at Newsbusters may be relieved by the final results: Southside With You, which opens widely today, is weakened by its deference to the Obamas and knocked out by its failures as a romantic comedy.

Roseberg isn't buying this rookie effort at all: "Tanne’s script, sadly, is uniformly bad; it drowns the characters in our awareness of their future, makes Barack’s persistence seem more like harassment than charm, and then essentially uses the testimonial of minor characters to force the pair together."

Her last line is also a dramatic opposite of Hornaday: "This is an hour-and-a-half-long movie about a day-long first date that manages to seem longer than the date itself." Boom.