Sunday’s Washington Post Magazine has two cover stories, one for Bill Clinton and one (if you turn it upside down on the other side) for Melania Trump. As expected, Bill Clinton is going to get a gushier treatment. Post writer Neely Tucker is so tender to the president that he mangles a fact, and the copy editors (also tender hearts) allowed it. “Fact Checker” Glenn Kessler will not be assigned to this story.

Tucker wrote, “He allegedly cheated on his wife, repeatedly, even in the Oval Office, and with a young woman who wasn’t that much older than their daughter.” 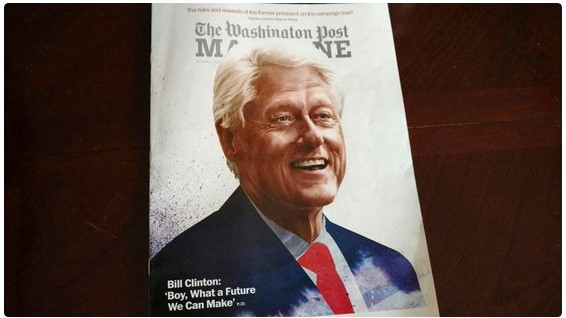 This came right after Tucker warned,

Heading into the homestretch, it seems obvious that even if he makes no further mistakes, even if he gives brilliant tactical advice, promotes inspiring programs for the working class and offers soaring rhetoric about the Great Promise of America, he is still going to be pilloried by opponents as being morally unfit to return to the White House.

Are “opponents” then, correct to “allege” – employing DNA-test results – that the president had an affair with intern? Sure enough, Tucker makes a “blue dress” joke, so he’s well-aware of the facts. But then he gets to compare and contrast. His competition for presidential spouse is a lying supermodel who got naked for photographers, so it’s all good:

Fortunately for Team Clinton, there is Team Trump.

America’s alternative first spouse is Melania Trump. Her website had said she has a college degree (she has also testified in court that she has one), but journalists who have examined her academic record report they could not verify it.

In her one and only campaign speech, she plagiarized Michelle Obama. Also, the third wife of the Republican nominee once posed nude for the cover of British GQ. The headline: “NAKED SUPERMODEL SPECIAL!”

In the battle of spouses, it is Bill “blue dress” Clinton vs. Melania “no dress” Trump. Vote your conscience, America.

Tucker began the piece with the usual Post cup full of sugar:

The plane descends through a haze of afternoon heat and humidity, the Arkansas River appearing as a lazy brown ribbon running through fields of green. There, flanking its southern banks, lies the City of Clinton, also known as Little Rock.

It could be suggested this sugar was tactical, so that the Post could note that perhaps the Big Dog needs to stay on the porch and not keep too high a profile. They note the oh-so-cooperative national Democrat media play along, and don’t even send reporters to his events: 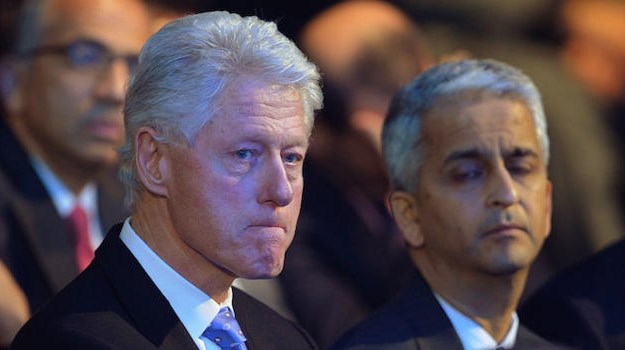 As the rain pummels the roof, they have him all to themselves. The media platform is near empty. A couple of newspapers, some local television. Exactly two national news organizations applied for accreditation.

For the Hillary Clinton campaign, this is perfect.... [Italics in the original.]

Bill Clinton, who famously loves to talk, has made more than 400 appearances at fundraisers, rallies, shopping malls and so forth in support of his wife’s campaign in the past eight months — but has not given a sit-down interview since last fall.

Tucker mentions that Bill bumbled it by meeting Attorney General Loretta Lynch at the airport before Hillary was (shocker) not indicted in the e-mail scandal. But was that really done without Hillary's knowledge?

Democrats all recall that Bill "embarrassed" her by whacking Barack Obama too hard in the primaries in 2008. (Call Obama inexperienced? That was apparently racist.) But then the media-Democrat complex all believes he's a political genius, which Tucker (like a good Democrat) repeats, as if this notion is required in every Bill Clinton profile:

Bill Clinton is one of the most brilliant political minds of his generation. He’s the original political star in the family. Despite his well-documented shortcomings, he is still his wife’s best fundraiser, and “both from a substantive but also tactical perspective,” Mook says, “he’s really our most valuable surrogate.”

He certainly seems like a more valuable surrogate when newspapers will still distort the record and use the word "alleged" for his "well-documented shortcomings." He's a brilliant tactician....except for the cheating-and-impeachment stuff those opponents rudely bring up.