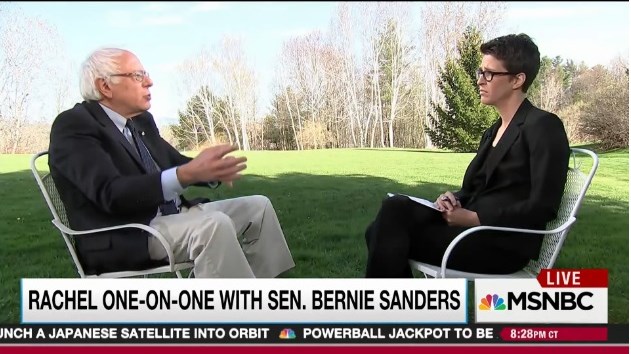 In a sympathetic interview taped in Vermont with MSNBC's Rachel Maddow that aired on Friday night, socialist presidential contender Bernie Sanders insisted the American people are "a little bit tired of corporate media" and "we have got to think about ways that the Democratic Party, for a start, starts funding the equivalent of Fox television."

Even The Huffington Post thought that sounded a little funny: "Of course, MSNBC is a corporate media outlet that is widely seen as a Democratic version of Fox News because of the perceived sympathies of many of its political talk shows."

Sanders also told Maddow that her Comcast employers are not popular. Maddow joked, in a preview of that segment of the interview: "That was awkward. But in a good way, I think. I`ll check and see if I`m still here after the commercial break."

Maddow ran Sanders through the usual horse-race questions about how the delegate math isn't on his side, and what he thinks he can accomplish at the Democratic convention in July. That's probably what caused Sanders to lecture about the corporate media and the (accurate) complaint that it prefers talking about the horse race to discussing the issues. The lecture came in response to Maddow asking how fast he would be able to enact his socialist platform if elected, he suggested it would be quite rapid.

SANDERS: I think the American people are sick and tired of establishment politics and economics. And, by the way, a little bit tired of corporate media, as well. They want real changes in this country and I think as president of the United States, we can ignite those changes.

SANDERS: I think we have got to think about ways that the Democratic Party, for a start, starts funding the equivalent of Fox television. Number two, I think that pressure has got to be put on media to say that you know what, maybe as a nation, the American people are entitled to hear real discussions on real issues.

You tell me, you're in the media, what percentage of the media discussions in this campaign is about process? Who's going to win in West Virginia? How many delegates does Hillary Clinton have? What dumb thing did Donald Trump say yesterday? Rather than why are we the only country in the industrialized world not to guarantee health care to all people?

How much discussion have you heard on TV about the fact that the top one-tenth of 1 percent now owns almost as much wealth as the bottom 90 percent? That`s the kind of discussion we need and the American people need to be engaged in that. So we have got to demand of corporate media, and that's going to be hard, because this is against their own best interests. 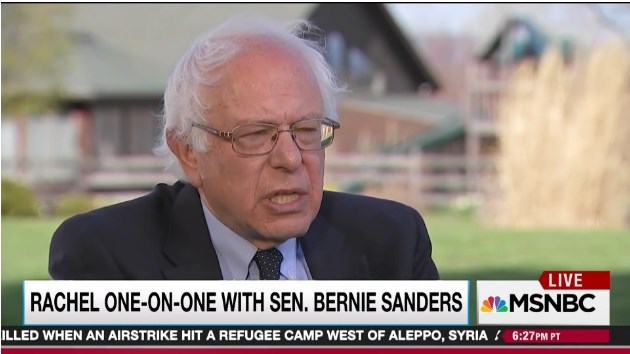 NBC is owned by who?

SANDERS: All right. Comcast is not one of the most popular corporations in America, right?

SANDERS: All right. Et cetera. Et cetera. And I think the American people are going to have to say to NBC and ABC and CBS and CNN, you know what, forget the political gossip. Politics is not a soap opera. Talk about the real damn issues facing this country.

I was in McDowell County, Virginia -- West Virginia, yesterday. People's life -- male life expectancy there is 18 years less than it is in Fairfax, Virginia. Eighteen years. People's male life expectancy is the equivalent of Guatemala. Do you think this should be happening in America? I don't think so. But we don't discuss those issues. So I would hope that the corporate media understands they have a responsibility to our democracy, and without a serious discussion on serious issues, not looking at politics just as a horse race.

Every political junkie thinks the media spends too much time on the horse race, and on the day's gaffes and negative attacks (which they then decry, even as they request them). But the average TV news viewer is not a political junkie. The average American often begins by asking who's winning and who's losing, and who said something sassy. Surely, network news consultants routinely tell executives that the people are bored silly by the issues. Maybe President Sanders would propose banning TV news consultants.

PS: Maddow also asked if Sanders could end up with an "ongoing movement" to tweak the Democrats, and demonstrated her usual libertine-left reflex to note the GOP's "very hard line on social issues for a very long time." As if she doesn't represent a very hard line on social issues? No, she just insists her side is winning (as long as you ignore all the grotesque abortion stories and footage).

MADDOW: There is only a very small club of people who have turned insurgent, interesting presidential candidacies into ongoing movements that then had an ongoing effort. President Obama tried and it really didn't happen with Organizing for America. The best example that I know of is actually on the right, is Pat Robertson, who turned his presidential campaign into the Christian Coalition, which ended up having a dramatic effect on the Republican Party.

MADDOW: It made them get very hard line on social issues for a very long time and they're reaping the benefit in the states right now.