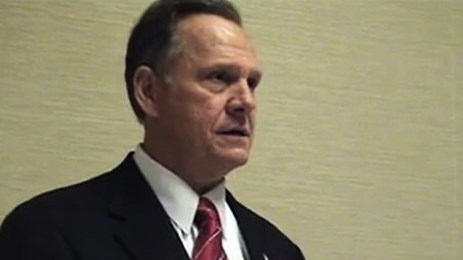 The Birmingham News is the largest newspaper in Alabama (even though it only publishes a print edition three times a week now.) That could be in part due to leftist pranks. The chief justice of the Alabama Supreme Court, Roy Moore, has defiantly ordered a halt on gay marriage licenses, prompting News commentator Kyle Whitmire to offer a Readers Poll on Sunday asking “Is Roy Moore a closeted homosexual?”

Liberals apparently love this question, because the poll results are 71 percent yes, 6 percent no, and 22 percent “Maybe, but just that one time in college.” It probably won’t be shocking to note that until he joined the News, Whitmire was a stringer for The New York Times for seven years (2005-12).

Moore, a Baptist married with four children, is best known for insisting on having the Ten Commandments posted in his courtroom, leading to court fights with secularists -- and popularity with Alabama voters.

Like many liberals, Whitmire thinks there are two political ideologies, Smart and Dumb. His Twitter account is "War On Dumb." So Moore is apparently both Dumb and Hiding He’s Gay. Is it possible Whitmire also editorializes in favor of more civility in politics? Let’s hope not. He wrote:

So, there's only one question left.

Is it whether gay marriage will happen in Alabama?

Please. Already, almost three quarters of the people in this country live in states where same-sex marriage is legal already. Do you think Alabama is going to suddenly change the minds of federal judges, including the United States Supreme Court which has already all but waved a rainbow-checkered flag at the finish line? If the high court didn't intervene with Florida, it won't for Alabama. Don't be ridiculous.

Can the state say to hell with the federal government and do its own thing?

And also: Pretty Much Every Federal Court Action against Alabama in 150 years.

Will The Apocalypse come?

Maybe one day, but nothing yet. You might see some roadside church signs telling you that this is the sign of the End Times, but let's be real. ISIS is setting people on fire. Which do you think is worse? That or same-sex marriage?....

Nope, there is only one question left for me.

I'm sorry, but think about it. No really. At least Google it. How many politicians who have stomped their feet over this issue turned out to be ... sexually bipartisan? There have been many.

Hat tip to Kyle and Damian for the heads-up. Whitmire was very proud of his handiwork on Twitter:

I was going to hell already, right? http://t.co/LzrbzuKI1L Readers Poll: Is Roy Moore protesting too much? #alpolitics

The Alabama Chief Justice took the bait. There is a God, but He likes me more than Moore.