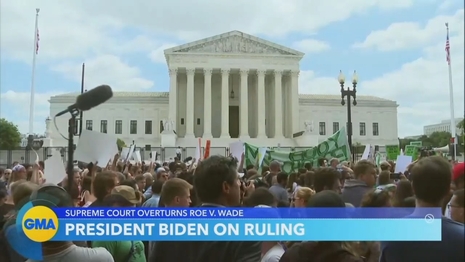 The network morning shows sounded the alarm on Saturday, warning of the “shockwaves” and “outrage” at the “newly activist conservative” Supreme Court majority that overturned Roe vs. Wade. On Friday, Terry Moran suddenly discovered the concept of judicial activism, attacking the conservatives as “judges in politicians’ robes.” On Saturday's Good Morning America he spoke of “newly emboldened activist conservative majority.”

Moran continued his worried tone: “This morning, shockwaves across the country. In a sweeping ruling that overturned a half a century of precedents, five justices ended the right of American women to choose abortion under the Constitution.”

Over on CBS Saturday Morning, co-host Dana Jacobson also saw “shockwaves” and worried about the “Court’s five most conservative justices.”

We begin this morning with the decision that sent shockwaves across America. The Supreme Court ending constitutional protection for abortions by overturning Roe vs. Wade. In a landmark decision, Friday, the Court's five most conservative justices struck down the nearly 50-year-old ruling, and a 1992 case that reaffirmed the right to an abortion.

CBS reporter Omar Villafranca featured just one clip of a talking head politician touring the ruling and three from the pro-choice side:

REP. CORI BUSH: I was able to pick up the yellow pages and find the provider when I was 18 after a rape that happened when I was 17 and get the services that I needed.

GOV. JAY INSLEE (D-Washington): We are going to fight like hell to keep Washington a pro-choice state.

Over on NBC, NBC highlighted this ugly poster: “[Clarence] Thomas is a treasonous turd.”

The pro-abortion propaganda on ABC and CBS was sponsored by Dove and Expedia. Click on the links to let them know what you think.

EVA PILGRIM: We start our coverage with ABC’s Terry Moran at the Supreme Court. Good morning to you, Terry.

TERRY MORAN: Good morning, Eva. It's a new day in America for women in this country who have lost a constitutional right first recognized 50 years ago. For the millions of Americans who fought for decades to end that right and many of those now feel that their prayers have been answered and for the Supreme Court and its newly emboldened activist conservative majority. This morning, shockwaves across the country. In a sweeping ruling that overturned a half a century of precedents, five justices ended the right of American women to choose abortion under the Constitution.

CAROL TOBIAS (President, National Right to Life Committee): We've been working on this for actually more than 50 years before Roe v. Wade, working to protect unborn children. We have certainly in the pro-life movement a lot of support and programs, centers, pregnancy centers that will help women.

MORAN: In dissent, Justice Stephen Breyer, joined by Justices Elana Kagan and Sonia Sotomayor, sounded a somber warning: “With sorrow for the court but more for the many millions of American women who have lost a fundamental ago constitutional protection, we dissent.” President Biden addressing the nation, saying it is a sad day for the court and country.

JOE BIDEN: The Court has done what it's never done before, expressly take away a constitutional right that is so fundamental to so many Americans that it already had been recognized.

MORAN: Former President Trump taking credit for recent conservative Supreme Court decisions: “Because I delivered everything as promised including nominating and getting three highly respected and strong constitutionalists confirmed to the United States Supreme Court.” And now with this ruling 13 states could enact their so-called trigger laws outlawing abortion after Roe is gone. So far, seven states have put their bans in effect. Speaker of the House Nancy Pelosi calling the Court's ruling cruel and heart wrenching.

HOUSE SPEAKER NANCY PELOSI: This is deadly serious, but we are not going to let this pass. A woman's right to choose, reproductive freedom is on the ballot in November.

MORAN: In his opinion justice Justice Alito insisted this applies only to abortion. But the reasoning that the court used to overturn Roe vs. Wade could be used to go after other rights and justice Clarence Thomas said, it should. He wrote his own opinion in which he called on this court to reconsider the cases that establish a right to purchase contraceptives, a right for gay people to get married. Even a right to private sexual conduct. Whit.

DANA JACOBSON: We begin this morning with the decision that sent shockwaves across America. The Supreme Court ending constitutional protection for abortions by overturning Roe vs. Wade. In a landmark decision Friday, the Court's five most conservative justices struck down the nearly 50-year-old ruling, and a 1992 case that reaffirmed the right to an abortion. The decision in this new case, Dobbs vs. Women’s Health Organization, sends the issue of abortion rights back to the states and is likely to result in abortion bans in about half.

While the Supreme Court's decision is a victory long sought by abortion opponents, the ruling was met with outrage by abortion rights advocates. Protests spread from the steps of the high court to cities across the country. And demonstrations are planned in more than 100 cities throughout the weekend. At a protest in Phoenix last night, police used teargas to scatter demonstrators. Police say the protesters were banging on the windows of the State Capitol while the senate was in session there. There were no injuries or arrests. We have a team of correspondents covering the seismic decision, and we begin with Christina Ruffini who is outside the Supreme Court. Christina, good morning.

OMAR VILLAFRANCA: There were protests here in Dallas and in states across the south where those trigger laws went into effect. To give an idea of the impact, if a woman here in Dallas wanted to get an abortion, to get to the nearest clinic she would have to travel more than 350 miles, two states away, to Wichita, Kansas. With the country's abortion laws now up to the states, Arkansas went into action yesterday.

GOVERNOR ASA HUTCHINSON: For me this is a turning point for our nation. Since Roe vs. Wade was decided, the states that desired to protect unborn life had been prohibited from doing so.

VILLAFRANCA: In Oklahoma, any medical staff performing abortions could face prison time. Oklahoma is one of eight states where the court's ruling triggers abortion bans with no exceptions for rape or incest.

MAN: God did this.

VILLAFRANCA: In Louisiana, the last abortion clinic closed down yesterday.

WOMAN: What you have prayed for is to make death for women easier because you don't allow them access to good medical care.

VILLAFRANCA: Throughout the country abortion activists say that poor women, many of color, will be hit hardest.

REP. CORI BUSH: I was able to pick up the yellow pages and find the provider when I was 18 after a rape that happened when I was 17 and get the services that I needed.

VILLAFRANCA: Activists and some governors are doubling down in an already divided country.

GOV. JAY INSLEE (D-Washington): We are going to fight like hell to keep Washington a pro-choice state.

GOVERNOR GAVIN NEWSOM: With the action that I'm talking here --

VILLAFRANCA: California's governor quickly signed legislation yesterday to protect out-of-state women who come for abortion. It's worth noting the landmark Roe vs. Wade case started here in Dallas. Henry Wade was the former Dallas county district attorney. Now the current Dallas D.A. and several others across the state of Texas say they understand the law, but they will not make prosecuting abortions a top priority. Dana?