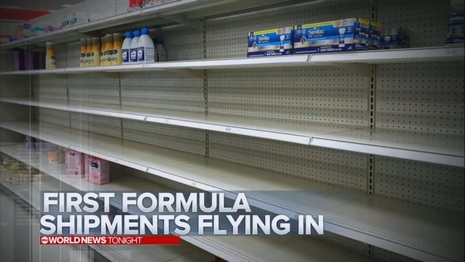 The Biden administration continued to unravel last week, spiraling into the 30s in several approval polls. But the network evening newscasts are doing their best to protect the President from responsibility when it comes to the many crises threatening his presidency. The latest example is the baby formula shortage with which millions of parents across the country are facing.

Media Research Center NewsBusters analysts looked at every baby formula shortage story on the evening newscasts from when they started covering it regularly. (For ABC and NBC, that was May 9. For CBS, it was May 10.)

According to our analysis, out of the 54 evening newscast stories on the formula crisis, only 10 featured mentions of culpability or blame for the Biden administration. The other 44 did not. 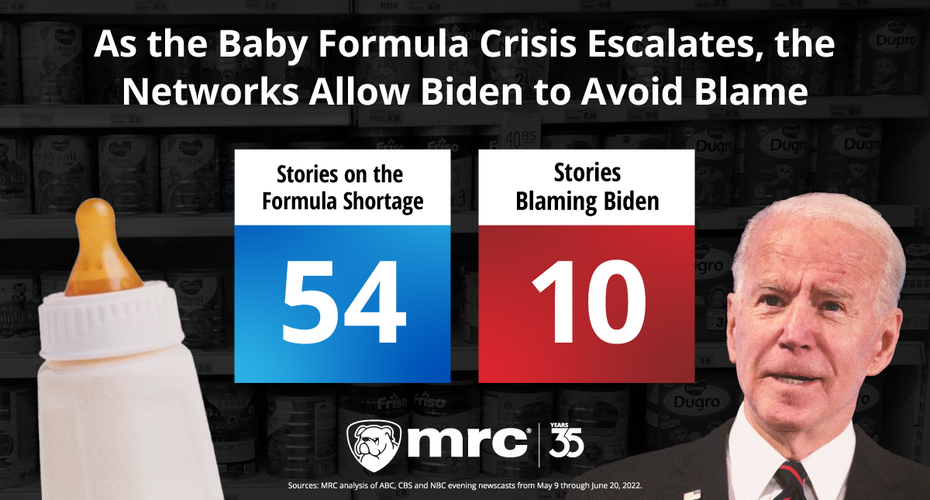 ABC’s World News Tonight offered the most stories: 22 total. Of those, however, 17 had no suggestions of blame for Biden and only three hinted that the President could have some responsibility. The CBS Evening News produced 17 total stories. Fourteen had no mention of blame compared to just three that did. Finally, Nightly News managed 15 stories on the shortage. Eleven with no mention of blame and four that dared to suggest that Biden may be responsible for things happening in the country.

Instead, ABC’s World News Tonight, the CBS Evening News and the NBC Nightly News projected Biden as proactive, taking decisive action to solve the spiraling crisis. On the May 18 NBC Nightly News, Lester Holt trumpeted, “Breaking news tonight, the major move by President Biden to tackle the nationwide baby formula shortage.” This is despite the fact that Biden’s FDA didn’t move to increase foreign imports of baby formula from abroad until mid-May.

As USA Today noted on May 26, “The problem was apparent months ago, long before the White House appeared to kick into high gear to respond to the crisis.”

On the May 13 World News Tonight, Mary Bruce touted, “The White House stepping in, giving families that rely on government assistance more flexibility to purchase any brands available, taking steps to import more formula and cracking down on price gouging.” On the May 18 CBS Evening News, Norah O’Donnell promoted:

We want to begin tonight with some breaking news, the president just announcing new actions to try and ease the pain of the baby formula shortage. There are two major measures. First, to help with supply chain issues, President Biden is invoking the Defense Production Act to get ingredients to manufacturers....Biden is now directing his administration to use government planes to go overseas and bring formula home. 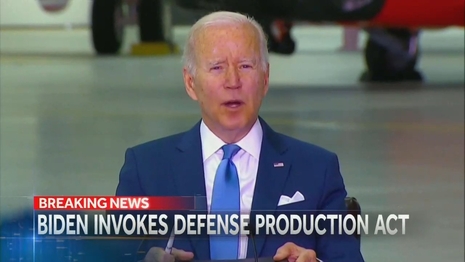 The criticism of Biden on the evening newscasts was mostly gentle. The May 22 CBS Evening News allowed no room for Republicans. Reporter Christina Ruffini mildly noted, “The White House is facing criticism that it didn’t act fast enough” to combat the shortage. On June 1, anchor Norah O’Donnell stated, “President Biden admitted today that he didn’t know how serious the shortage was until April.”

ABC was similarly lenient in May. It wasn’t until June 1 that World News Tonight anchor David Muir bothered to ask: “Should the President have known about this sooner?” On that day, reporter Mary Bruce admitted “the White House is really struggling to explain” the shortage.

NBC at least suggested there was culpability in May. Reporter Kate Snow on May 18 allowed that “the White House [was] sharply criticized by members of its own party.” It was the June 1st Nightly News that finally showcased the seeming incoherence of Biden’s handling of the baby formula shortage.

JO LING KENT: Tonight, President Biden acknowledging he did not know about the formula crisis for two months, following the closure of the critical Abbott manufacturing plant in Michigan.

JOE BIDEN: I became aware of this problem sometime in after April in early April about how intense it was.

KENT: But moments earlier in his meeting with top manufacturers.

MURRAY KESSLER (Perrigo CEO): We knew from the very beginning this would be a very serious event. We could foresee that this was going to create a tremendous shortage.

KAITLAN COLLINS [To Biden]:  Didn’t those CEOs just tell you that they understood it would have a very big impact?

BIDEN: They did. But I didn’t. 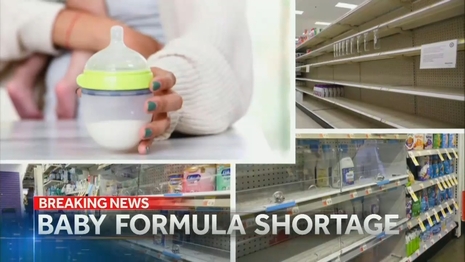 So, who did get the blame? Baby formula provider Abbott, as well as the FDA came under scrutiny. On the May 22 NBC Nightly News, reporter Jo Ling Kent vaguely (and generically) wondered, “Did the government drop the ball here?” (That was not counted as a Biden blame mention in our study.)

Whether one thinks it’s fair to blame the Biden administration for the shortage, we know that the Trump administration (and Republican presidents in general) don’t get the benefit of the doubt on things like this. Also, as I explained in a May 24, 2022 study for NewsBusters, journalists had no interest in assigning blame on Biden for the skyrocketing gas prices.

Afghanistan, inflation, gas prices, the baby formula shortage. When it comes to network reporting, nothing seems to be Joe Biden’s fault. The American public clearly don’t agree with this assessment, but the press is doing its best to cover for the President.