CBS’s King: Does Massacre Define U.S.? ‘Who Are We, Really?’

CBS Mornings on Tuesday used the evil, racist massacre of African Americans in Buffalo, New York over the weekend to generalize to the whole country. Co-host Gayle King wondered, “Who are we really, as America?”  Co-host Nate Burleson agreed, “This is who we are.”

Later in the show, guest Ian Bremmer lamented the United States as completely mired in hate: “We elected Obama. Didn’t make a difference. The fact is the United States today is the most politically divided and dysfunctional of the advanced industrial democracies.”

The author allowed that the United States is still a magnet to many: “The dollar is really strong. People want to come to our country still. We have this great technology. Our military certainly works. We see all of that." But, he concluded, “Washington is so divided that we can't get the obvious done.”

What is the obvious? Bremmer didn’t say. Talking about the despicable shooting in Buffalo, New York, King hinted that the massacre should define the country in our current moment: “And when they keep saying, ‘This is not who we are as America,’ a lot of people are saying, ‘Who are we, really, as America?’”

Co-host Burleson offered a broader perspective, highlighting the greatness of America, in contrast to King’s broad generalization: “We can be both. We can be a great country but also deal with some of these tragedies. This is who we are.”

JAMES CORDEN: Our hearts and souls ache for you.

GAYLE KING: That's so true, James Corden. “Our heart and souls ache for you.” And when they keep saying, “This is not who we are as America,” a lot of people are saying, “Who are we, really, as America?

TONY DOKOUPIL: Unfortunately, we do have a certain history and this continues it.

NATE BURLESON: We can be both. We can be a great country but also deal with some of these tragedies. This is who we are.

TONY DOKOUPIL: We're going to turn now to global affairs and some looming crises that could unfold over the next ten years. They are outlined in the new book The power of crisis and How Three Threats and Our Response Will Change the World. It's published by Simon and Schuster,a division of CBS' parent company. That would be Paramount Global. The author is Ian Bremer. Ian joins us now. He is the founder and President of the Eurasia Group and G-0 Media. Ian joins us now. Ian, thank you for being here.

TONY DOKOUPIL: You narrowed it down to three crisis, but there's a new one every day. The one we're dealing with in Buffalo is white supremacy, which you say is a bigger threat than radical Islam in this country. By the way, our government agrees. 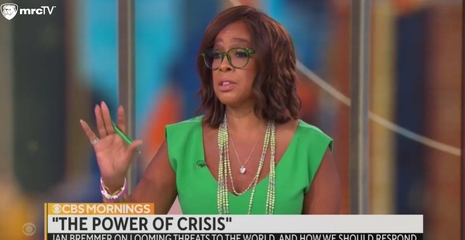 GAYLE KING: The public doesn't agree with that. They still see it differently.

DOKOUPIL: Some in the public don't agree. Why is it so hard, first of all, to get agreement on that question? And also, to stop it?

BREMMER: Why it's so hard is because it doesn't seem to be a really urgent problem for the average American. Because most of the people it's hitting are seriously disenfranchised. I mean, it sort of reminds me of crack cocaine as a crisis in the '80s and '90s. We knew it was a big deal but it was inner city. Did the people that were in power really care or was the response going to be performative? It’s performative. The global crisis feels like climate did 20 or 30 years ago before it started hitting everyone. Remember? We all knew the science on climate, but we weren't going to do anything until it started hitting California and Italy and Australia. And now we are responding. We truly are. Part of the book is about when the crisis gets big enough, your capacity to make a real difference and even when the U.S. Is still dysfunctional and the U.S./China relationship isn't so good, you actually see that traction. It's playing out right now.

KING: But I like how you say on page 22, early in the book, “No sources of outrage more deeply embedded in American life than structural racism and determined efforts of some to pretend it does not exist. To paraphrase William Faulkner, Institutional racism isn't dead. It isn't even past.”

BREMMER: It isn’t past.

KING: That's what I'm saying a lot of people don't realize. I know all the politicians say it. All he elected official, the FBI Directors have said it. Both of them, Comey and Christopher Wray. But the American people I don't feel still understand how serious this problem is.

BREMMER: When you guys started yesterday in response to Buffalo, I saw you. “I'm tired of being angry.”

BREMMER: And how do you not feel that after decades and decades? It's not like Jim Crow was around the corner. We elected Obama. Didn’t make a difference. The fact is the United States today is the most politically divided and dysfunctional of the advanced industrial democracies. The dollar is really strong. People want to come to our country still. We have this great technology. Our military certainly works. We see all of that. And yet, Washington is so divided that we can't get the obvious done. The funny thing is my book ultimately ends up still very hopeful. Even if we can't fix that, we still see that a target rich crisis environment that we're in today is not about curling up in a ball and waiting for the inevitable. It's precisely that those crises force us into action. And frankly, the headlines we have seen for the last two months on Russia, I wish Putin had read an earlier draft. He didn't think we could respond. And it turns out, we can.