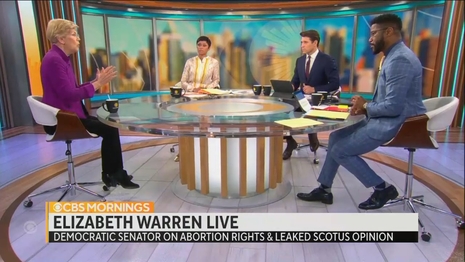 Apparently, rage and doxxing aren’t really a big deal, as long as it’s for the right reasons. CBS Mornings journalists on Friday interviewed far-left Senator Elizabeth Warren about the Supreme Court potentially overturning Roe, but had no questions for her about riling up a pro-abortion mob. They also ignored the left's shocking doxxing of conservative justices on the Supreme Court.

Despite an almost six minute interview, the CBS co-hosts offered only gentle questioning, barely challenging the Democrat. No mention of Warren’s rage-filled screaming to supporters at the Supreme Court: “I am here because I am angry!” No mention of, as National Review explained, a pro-abortion group exposing the addresses of six conservative Supreme Court justices.

Instead, the co-hosts allowed Warren to pretend the violence and rage was all on the other side. Warren sputtered, “Remember what this opinion is about. It has opened the door to a whole lot of ugliness.” Co-host Tony Dokoupil agreed: “Yeah.”

Here’s the best co-host Nate Burleson could do: “You believe in a woman's choice no matter how difficult the decision. But there's a question: should there be any limits on abortions?”

Making it clear where he stands, Dokoupil agreed with Warren’s pro-abortion rants: “An extraordinary thing for a government to tell a person they need to go forward with a pregnancy.”

As for doxxing of the six conservatives on the Supreme Court, CBS Mornings on Friday ignored it. On Thursday's Evening News, reporter Ed O'Keefe briefly referenced the threats:  “CBS News has learned general threats of violence against them are up. Their home locations have been shared online, and they're receiving more targeted personal phone threats.”

The pro-abortion spin was sponsored by Progressive insurance and Toyota. Click on the links to let them know what you think.

TONY DOKOUPIL: Picture of the Capitol there. Democratic Senator Elizabeth Warren is urging the Senate to take action to support abortion rights after a leaked draft of a majority opinion shows the Supreme Court could be set to overturn the landmark 1973 abortion rights ruling Roe V. Wade. In her book Persist, now out in paperback, Warren writes, "In the same way that congress passed laws to provide access to health care, think Medicare and Medicaid, Congress should pass a law to protect nationwide access to abortion.” Such a bill would face tough odd passing the senate." Senator Warren Jones us now. Tough odds is an understatement. Do I have that right?

SENATOR ELIZABETH WARREN: You do.

DOKOUPIL: You don't have the vote, but you're going to go forward to make everybody vote. What's the purpose of that?

JERICKA DUNCAN: We just saw a map on the screen that said certain or likely to end abortion. When you look at some of these states where the numbers are not as high as, you know, the overall nation numbers of at least 60  and sometimes 80 percent where people support this, why not leave it up to the states when you have so many where the numbers may not be that high, and you look at that map and see how many are almost certain to try and get rid of it?

WARREN: You know, actually I do want to focus very much on the idea of what it means to outlaw abortion. I lived in an America where abortion was illegal, but it didn't mean that all abortions stopped. It just meant the safe legal abortions stopped.

I lived in an America where women bled to death from back alley abortions. I lived in an America where women developed infections, horrible complications from unclean abortions. I lived in an America where young women took their lives rather than go forward with an
abortion —  with a pregnancy that they could not manage. Look, we passed laws at the federal level to decide minimum wage, to decide access to health care. This is about protecting not the people with power, this is about protecting all of the people in our country who don't have power.
DOKOUPIL: Senator, what you're saying is true, and yet there are states that have said despite that we want to live by a different principle. A common refrain you hear is if you don't like those laws in your state, you should just move. What do you say to that?

WARREN: We don't do that any place else in our federal government. We don't say if you don't like the minimum wage in Alabama, move somewhere else. We say as a nation we care for each other, and we decide, for example, that work is worth a certain amount. We decide, for example, on Medicaid, that there's going to be for the poorest among us at least some access to health care. We decide this for children to make sure that there's going be to be money — we decide this on food, and we should decide this on this basic health decision that will hit the most vulnerable among us. Those of us who feel like we're in states where this will never happen. First of all, we can't turn our backs on the rest of those who will be hurt. But secondly, remember what this opinion is about. It has opened the door to a whole lot of ugliness.

WARREN: Opened the door to the question —  contraception, criminalizing a woman who seeks an abortion. Will every miscarriage now be investigated? Will women be charged in they're working too many hours and put their pregnancy at risk? This is a kind of invasion that if the supreme court has its way here and we don't fight back at the federal level could touch the lives of every one of us.

NATE BURLESON: You're saying now, in the book you write you believe in a woman's choice no matter how difficult the decision. But there's a question: should there be any limits on abortions?

WARREN: You know, I'm going to put it this way -- I think that the woman who is most affected should be at the heart of this.

WARREN: I think that she should be able to call on her partner.

WARREN: Her mother, her priest, her rabbi. She should be able to bring in the people she needs. But in a pregnancy, I don't believe that it is the state that should intervene with its heavy hand and make the decision.

DOKOUPIL: An extraordinary thing for a government to tell a person they need to go forward with a pregnancy.

DOKOUPIL: All right. Senator Elizabeth Warren, we have a lot more we could talk to you. Please come back.