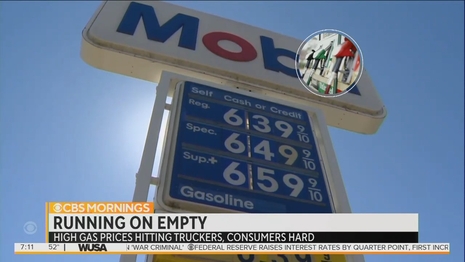 Americans over the last month have been enduring painful, skyrocketing gas prices. The impacts are echoing out to all parts of the economy and squeezing already stressed wallets. But if you watched the morning and evening network newscasts, you would think almost all the blame for this falls on Russia’s invasion of Ukraine. Joe Biden? His role has almost entirely been ignored.

From February 24 to March 21, the networks put the culpability squarely on Russia by a 11-to-1 margin. ABC, CBS and NBC blamed Russia a whopping 33 times and the Democratic president just 3 times. (The breakdown by network: NBC blamed Russia 16 times, CBS 11 times and ABC 6 times.) 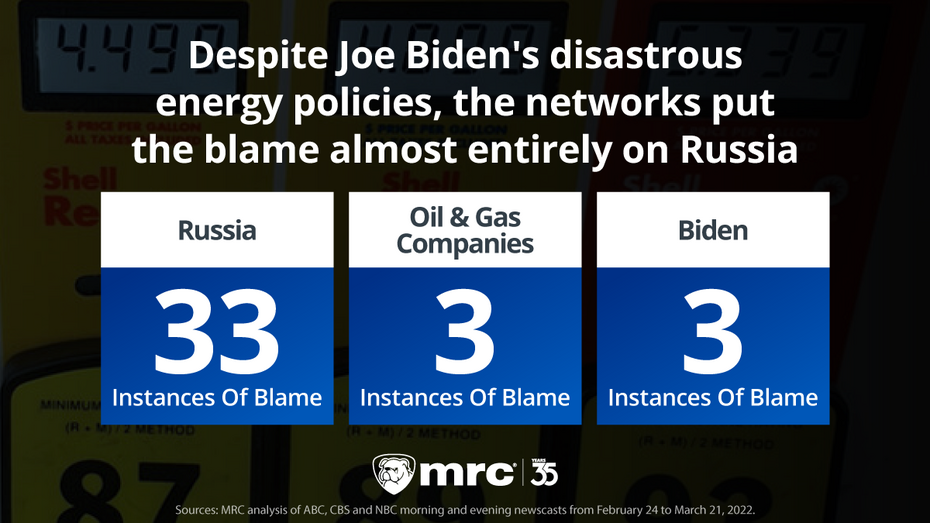 The networks blamed oil and gas companies 3 times and other miscellaneous excuses (the pandemic, switch over to a summer gas blend, inflation) an additional 9 times. It’s not as though gas prices weren’t already sky high. On February 21, just prior to the beginning of the war, they were at an average of $3.62. (They were $2.39 when the Democrat took office.) 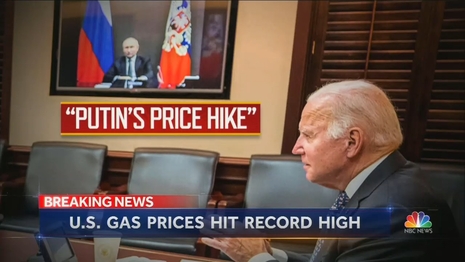 As a presidential candidate, Biden promised to “get rid of fossil fuels” and pledged “no more coal plants.” On the first day of Biden’s presidency, he killed the Keystone Pipeline. In the last 14 months, the three network evening newscasts have allowed a scant 29 seconds to the move (16 seconds on NBC, 10 on CBS and just 3 on ABC)

Biden also paused oil and gas leasing on federal lands. In May of 2021, he removed sanctions on the Nord Stream 2 pipeline to bring gas from Russia to Germany, a major win for Vladimir Putin.

And yet, the tone of the reporting during the first four weeks of the war blandly echoed the idea that all of this was happening because of Russia, downplaying or ignoring the already high prices.

On the February 24 Today, Senior Business Correspondent Stephanie Ruhle sympathized with the President: “We have heard from President Biden, he is acutely aware of this. He's very sensitive to the price of the pump for the American people. He has said he will do everything he can.”

With President Biden blaming rising costs on Putin’s price hike, the White House is trying to remind Americans who they say is responsible.

Sometimes, there was no attempt at all to assign blame. Skyrocketing gas prices just happen as though Americans are victims of nature. The March 5 World News Tonight on ABC featured the sad impact of the high prices, but presented them as simply inexplicable.

MAN: I don't have a very economical vehicle to drive back and forth from Cookeville to Nashville. Therefore, I had to quit my job.
...
WOMAN: I'm not even making enough to cover the gas. So, now, I'm choosing between gas and groceries.

On March 8, World News Tonight promoted the President chastising anyone who blamed him, putting the potential fault on oil and gas companies:

Today, the President, aware of critics who say the US should produce more oil and gas domestically, urging energy giants to start drilling with the permits they already have. And he warned them not to take advantage of the moment.

On February 25, Ruhle returned to the Today show to lament the box Biden is in: “The President has said he’s concerned about it. He wants to try to help Americans.... His options are somewhat limited.”

In November of 2020, the Media Research Center conducted a poll about the 2020 election and what Americans actually learned from the media. As then-Research Director Rich Noyes noted, “More than half (50.5%) of Biden voters said they did not know about [Trump moving to make us energy independent]. If the information was known by all, 5.8% of Biden’s voters say they would have changed how they voted.”

America became a net exporter of oil for the first time in September of 2019. But you wouldn’t have known that from watching ABC, CBS and NBC in the Trump years. They buried this accomplishment. And during Biden’s presidency, the networks are doing everything they can to censor his crippling energy policies.