FLASHBACK: ABC Fawned Over Holocaust-Denying Dictator: How Often Do You Cry?

ABC last week struggled to respond to Whoopi Goldberg’s shocking comments that the Holocaust wasn’t about race. But this is the same network that once fawned over the Holocaust-denying former leader of Iran. Fifteen years ago this week, then-Good Morning America host Diane Sawyer gushed about Mahmoud Ahmadinejad as a “sentimental,” “sympathetic” man who cries a lot since he’s so caring.

On February 13, 2007, Sawyer introduced an interview with the then-Iranian leader:

DIANE SAWYER: A number of people have already said is there anything surprising, personal about President Ahmadinejad that we didn't know? Well, it turns out, someone told me he cries a lot. That he is dramatically sentimental and sympathetic if someone comes up and expresses a personal plight. So I just asked him, are you often in tears? 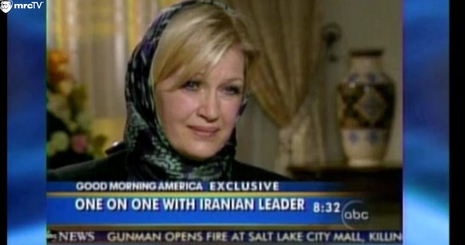 MAHMOUD AHMADINEJAD: Yes, that's true. Not only for Iranians, of course, they are very close to me and I love all Iranians. And anywhere, when I see people suffering, I have the same reaction. And we feel sad for people of Iraq, for the people of Palestine. Anywhere we have war, we feel sad.

Even when I see on TV that, for example, some Americans, because of tornadoes or a hurricane, they have lost their homes, I become sad. Because, for us, human beings are respectable, no matter where they are. Human beings are respectable and they have their own dignity. And all of us should help so that people can lead better lives, to live at peace.

This is the same vile leader who called the Nazi extermination of Jews a “myth.” Yet Sawyer seemed touched that he might cry during the final moments of Titanic.

But then Sawyer, who would later anchor World News Tonight, is the same journalist who (also in 2007) interviewed Syrian dictator Bashar al-Assad and asked him: “You like video games?... Do you have an iPod?”

Possibly the worst example of Sawyer sucking up to authoritarian regimes happened in, yes, North Korea.

SAWYER: It is a world away from the unruly individualism of any American school.
CLASS OF TEENS IN UNIFORMS: “Good morning.
SAWYER TO CLASS: “Good morning.
SAWYER VOICEOVER: “Ask them about their country, and they can’t say enough.
NORTH KOREAN GIRL, IN ENGLISH: We are the happiest children in the world.
SAWYER TO CLASS: What do you know about America?
SAWYER VOICEOVER: We show them an American magazine. They tell us, they know nothing about American movies, American movie stars....and then, it becomes clear that they have seen some movies from a strange place....”
SAWYER TO CLASS: You know The Sound of Music?
VOICES: Yes.
SAWYER, SINGING WITH THE CLASS: Do, a deer, a female deer. Re, a drop of golden sun....
CHARLES GIBSON: A fascinating glimpse of North Korea.
— Sawyer reporting from North Korea for ABC’s World News With Charles Gibson, October 19, 2006.