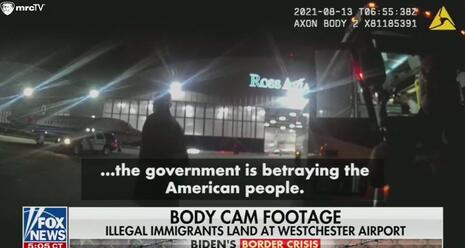 Last week saw explosive developments in the crisis at the border, a crisis that is now spreading throughout the country. But you wouldn’t know that from the corrupt news networks that are censoring the shocking details of multiple border-related nightmares.

On Thursday, only Fox News covered illegal immigrant criminals being deposited in places like New York, to the bewilderment of local law enforcement. Fox reporter Bill Melugin explained, “A source within ICE tells me that the agency has in fact been releasing some illegal immigrants who have misdemeanor criminal record, some things like assault, or drunk driving.”

BILL MELUGIN: New body cam footage out of New York shows the moment a local police officer came across a U.S. government charter flight that landed at Westchester County Airport in the middle of the night full of illegal immigrants. As they exit onto the tarmac, the officer questions the federal contractors.

FIRST MALE: You're on a secure facility here and we don't really know anything and we're in charge of security. So, hence where we're having a problem here.

SECOND MALE A lot of this is just --

SECOND MALE: -- down low stuff that we don't tell people. Because what we don't want to do is attract attention. We don't want the media. Like, we don't even know where we're going when they tell us.

FIRST MALE: I get the whole secrecy and all this. But this is even above my pay grade.

SECOND MALE: What's the big secret? Everybody knows it's happening.

FIRST MALE: You know why? Because if it gets out, the government is betraying the American people.

And the release of illegal immigrant criminals isn’t in dispute. As Melugin explained, the Biden administration is admitting it: “I asked ICE about this today, they did not deny it. They told me instead, they do these releases on a case by case basis.”

As noted on NewsBusters, Thursday, Yuma Sector Border Patrol Agents and DHS Secretary Alejandro Mayorkas met in a meeting that was secretly recorded and leaked to Townhall. The liberal Mayorkas was pressed on the Biden administration not assisting the beleaguered border agents.

They told Mayorkas just how “demoralizing” it was to see Joe Biden and others “demonize” border patrol.

On January 21, Fox News reported that TSA is allowing illegals to use arrest warrants as a form of ID to board planes. A TSA spokesperson told the network: “For non-citizens and non-U.S. nationals who do not otherwise have acceptable forms of ID for presentation at security checkpoints, TSA may also accept certain DHS-issued forms, including ICE Form I-200 (Warrant for Arrest of an Alien).”

Throughout last week, the networks had every opportunity to cover this shocking development, but only Fox News actually did on Monday.

In an inauguration study for NewsBusters, I explained that the networks allowed just 260 seconds on the main border crisis in December and nothing in November. These latest developments show that they are still determined to cover for every reckless policy being implemented by the Biden administration.