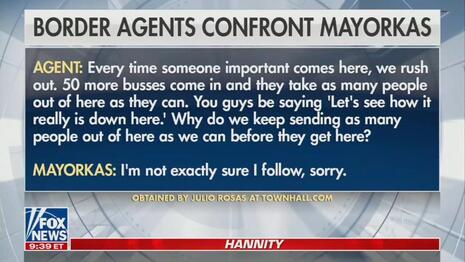 A meeting between Yuma Sector Border Patrol Agents and DHS Secretary Alejandro Mayorkas this week was secretly recorded by an agent and leaked to Townhall’s Julio Rosas on Wednesday. In the recording, agents can be heard butting heads with the Secretary as they pressed him on the lack of assistance from the Biden administration with one agent apparently turning their back on him. Over 24 hours after the story broke and a statement from his office, and the liberal broadcast networks were still hiding it.

“Department of Homeland Security (DHS) Secretary Alejandro Mayorkas' meeting with Border Patrol agents in the Yuma Sector on Wednesday did not go well after he admitted the staggering number of illegal border crossings has made the agents' job more difficult,” Rosas reported.

Adding: “Mayorkas conceded the massive influx of people illegally crossing into the sector, along with the rest of the southern sectors, has not been easy.”

The full audio is available to listen to at the link above. Townhall does note that “Audio distortion is a result of being discreetly recorded by a U.S. Border Patrol agent.”

In the audio that was aired on Fox News Channel’s Hannity Wednesday night, Mayorkas can be heard playing dumb when confronted with how illegal immigrants are bussed away from the Yuma Sector holding area when either he or politicians come to visit:

Through the scratchy audio, the agents could be heard laughing at Mayorkas’ weak attempt to seem oblivious.

Rosas further reported that some of those agents pressed Mayorkas on how he, other Biden officials, and President Biden himself have “demonized” the Border Patrol.

“The second agent said it has been ‘demoralizing’ to see politicians and others ‘demonize’ Border Patrol when they often save illegal immigrants from injury and death,” he wrote, noting the incident where the left and the administration lied about agents “whipping” people trying the cross. “Mayorkas said he understands being demonized because he has had threats against his life and the life of his family.”

Also included in the audio Fox News played was a disgruntled agent turning his back on Mayorkas. “The commitment remains that we’ll keep fighting. And let me just say you can turn your back on me, but I’ll never turn my back on you,” the Secretary said. “You did the day you were appointed,” the agent shot back.

And although DHS didn’t respond to Townhall’s request for comment, they did respond to Fox News. “Secretary Mayorkas welcomes candor during these conversations, and appreciates and respects the opinions of each member of the CBP workforce,” Sean Hannity read.

The bias by omission on Thursday’s evening newscasts was made possible because of lucrative sponsorships from Prevagen on ABC, Crest on CBS, and Bayer on NBC. Their contact information is linked.