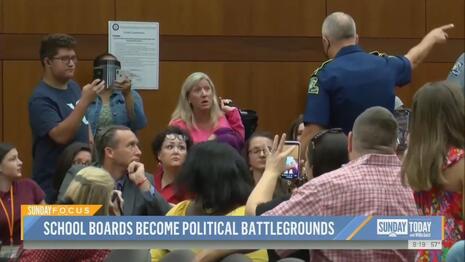 Late on Friday night, the National School Boards Association (NSBA) belatedly apologized for language that linked concerned parents to domestic terrorists. But all three networks from Friday to Monday morning ignored the organization retreating, “On behalf of NSBA, we regret and apologize for the letter.... There was no justification for some of the language included in the letter.”

The original letter in question claimed that some actions by parents “could be the equivalent to a form of domestic terrorism and hate crimes.” On the weekend morning and evening newscasts, as well as Monday, the apology went unmentioned. NBC’s Sunday Today, however, offered a new hit piece on parents, falsely claiming that Critical Race Theory is not in schools and also blaming the whole thing on “former Tea Partiers.”

In the segment, NBC reporter Antonia Hylton smeared concerned parents as just ex-Tea Party nuts: “But when you peel back what’s actually happening, what you often find that there are really well organized, often conservative groups, people with connections to former Tea Partiers, to Trump administration allies, who are really galvanizing parents around these issues.”

She also falsely claimed, “It’s not taught in public schools, but some conservative activists and parents have turned it into a catch-all for diversity programs and lessons about racism they say could make white students feel guilt.” 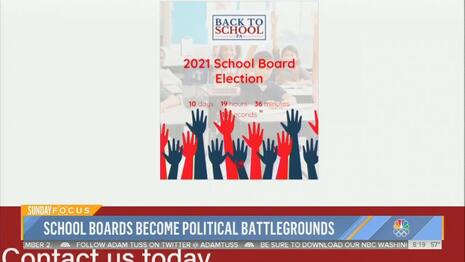 Call it CRT or something else, but this is clearly being taught in schools.

The smear job on NBC’s Today was sponsored by Stanley Steemer and Colgate. Click on the links to let them know what you think.

WILLIE GEIST: Last week, an elected member of the Brevard County Florida School Board made national news when she spoke at a meeting about the threats she has received from some parents and activists over her support of masks for children in school.

Jennifer Jenkins detailed and police confirmed harassment, stalking and a bogus call to child services from someone accusing Jenkins of abusing her young daughter. Jenkins was cleared of that quickly. Passionate parents always have spoken up for their kids at school board meetings, but this is something else, something uglier. So how did we get here? NBC’s Antonia Hylton has our "Sunday Focus."

UNIDENTIFIED MALE: This is illegal.

JENNIFER JENKINS (Brevard County Florida School board member): I reject them following me around in a car, following my car around. I reject them saying that they’re coming for me, that they’re -- that I need to beg for mercy. I reject that when they are using their First Amendment rights on public property, they’re also going behind my home and brandishing their weapons to my neighbors.

JENKINS: This is a political, calculated move to incite voters to be engaged using fear and different tactics.

HYLTON: Joining Johnson County, Kansas, and Williamson County, Tennessee, all making national news in the wake of persistent, violent threats against school board members. This week, parents in Michigan and Virginia filing suit against the Department of Justice for allegedly stifling free speech by investigating similar threats. When schools reopened after COVID, masking became politicized at the national and local levels.

UNIDENTIFIED MALE: My grandmother died of COVID because someone wasn’t wearing a mask.

HYLTON: And in the wake of George Floyd’s murder, fights over critical race theory. A graduate level study of the relationship between the law and racial inequality. It’s not taught in public schools, but some conservative activists and parents have turned it into a catch-all for diversity programs and lessons about racism they say could make white students feel guilt.

UNIDENTIFIED FEMALE: I feel this is culturally sanctioned discrimination.

HYLTON: Now, special interest groups and Political Action Committees or PACs giving their attention and big money to what were once nonpartisan school elections. Cecelia Robinson-Woods is the only black female superintendent in all of Oklahoma. A conservative PAC raising concern over critical race theory which is not taught in her district sent out an e-mail warning supporters, if we continue to allow these kinds superintendents, school boards and teachers to control the educational curriculum of our children, there is no hope for the future.

HYLTON: What have you seen happen to the superintendent?

MILO WILSON (Millwood Public School Board VP): Just all the crazy questions that you can possibly ask about anything racist. She’s been asked.

HYLTON (voiceover): PAC leaders claim focusing on school boards is one of the most direct ways to reach real people.

PAUL MARTINO (Back to School PAC founder): I said, look, that’s not good enough for our kids, my kids included. Let’s go do something about that.

HYLTON (voiceover): Frustrated by his children’s school remaining virtual, Paul Martino, launched a PAC, Back to School in P.A., and pledged $500,000 to school board members that run on a platform focused on keeping schools open.

MARTINO: If people on the other team have an opposing point of view and they want to empower parents like we’re doing on a different issue, please join the party.

JONES: All of this has completely impeded our ability to govern and focus on our students and their success.

GEIST: And Antonia joins me live in studio. Antonia, good morning. It’s great to see you.
So, you’ve been covering these meetings for months and months now very closely. What seems to be driving this from parents, because there’s also a lot of outside influence, there’s money coming into some of these races?

I mean, first, there are two issues that are really the center of all of this, and that’s COVID protocols masking and then, critical race theory, this national fight that we’re seeing popup everywhere over how to talk about American history, racism and diversity in schools. But when you peel back what’s actually happening, what you often find that there are really well organized, often conservative groups, people with connections to former Tea Partiers, to Trump administration allies, who are really galvanizing parents around these issues.

And that’s a really key transition that we’re seeing here, because these are formerly nonpartisan seats. I mean, school boards are supposed to be kind of boring. City council members are not supposed to be in the news every single day in your local community. But now, people are looking at them in a new light where they are seeing them as a space where they can have serious cultural and political influence, and that’s going to have an effect on communities and on future elections.

GEIST: You have to admire anybody who serves on a school board right now, it’s such a difficult job because, as you say, back when we were growing up, it was sort of a routine gathering of the communities.

GEIST: It’s a little bit scary and things are changing. Antonia, thanks so much. Great report. Good to see you.