Rich Co-hosts at CBS: AOC Wasn’t Talking About Us Because ‘We Ain’t Rich’ 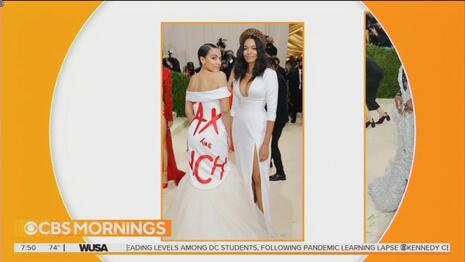 Talk about tone deaf. The co-hosts at CBS This Morning touted socialist Congresswoman Alexandria Ocasio-Cortez wearing a “tax the rich” dress, ridiculously insisting that it didn’t apply to them because “We ain’t rich.”

Duthiers gushed, “We are talking about style.... Starting with the biggest fashion moments at the night at the Met Gala in New York City. A-list stars were flashing some creative looks.... Congresswoman Alexandria Ocasio-Cortez's gown game with a message. Can you see that?” Gayle King repeated the message, “Tax the rich.”

In June, Dokoupil channeled his inner socialist, hyping a probably illegally-obtained ProPublica report about the wealthiest Americans. Dokoupil ranted about how the “super wealthy” are leaving “us” with “crumbs.” Tony, you ARE the super wealthy. He’s also the same guy who screamed at everyday Americans to come talk about income inequality while showing them an actual pie.

On Tuesday, after learning that she is part of the “one percent,” View co-host Whoopi Goldberg ranted against Ocasio-Cortez’s “tax the rich” message.

The clueless touting by the CBS hosts was sponsored by Purina. Click on the link to let them know what you think.

TONY DOKOUPIL: Stylish man. You're going to be talking about style today.

VLAD DUTHIERS: We are talking about style. Stories we think you’ll be talking about. Starting with the biggest fashion moments at the night at the Met Gala in New York City. A-list stars were flashing some creative looks.

DUTHIERS: Congresswoman Alexandria Ocasio-Cortez's gown game with a message. Can you see that? It says —

TONY DOKOUPIL: Were there any rich people there last night?

DUTHIERS: Just a few. Not us. ‘Cause we ain't rich.

DOKOUPIL: And we weren’t invited.