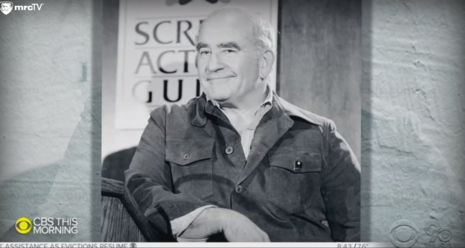 CBS, like ABC and NBC, referred to Asner as an “activist,” avoiding ideological labels for the far-left star. But reporter Carter Evans pushed the conspiracy theory that CBS bowed down to conservatives by cancelling Lou Grant in 1982. Given that Asner would eventually embrace the “9/11 Truth” movement, his paranoia isn’t shocking. Here’s Evans:

Asner was elected president of the Screen Actors Guild in 1981 and he used that platform to frequently criticize the Reagan administration. In 1982, despite being a top ten rated show, Lou Grant was cancelled. Asner always believed his politics were the reason.

But it wasn’t a top ten show in 1982. (These programs were.) The series finale moved into the top ten after the cancellation. However, a look at the 1982 reporting of the show’s end highlights the declining ratings. On May 18, 1982, The New York Times explained CBS’s decision:

CBS, in a statement announcing the cancellation early this month and reiterated yesterday, said that it was dropping the show because the audience share had dropped from 32 to 27 and that Mr. Asner's personal activities and statements were in ''not in any way a factor.''

In September of 1982, UPI’s Vernon Scott added, “CBS canceled the Emmy-winning show earlier this year because of low ratings.”

Over on ABC’s Good Morning America, Monday, reporter Chris Connelly referred to Asner simply as a “longtime activist.” On NBC’s Today, reporter Natalie Morales abandoned ideological labels, stating, “Asner was an outspoken activist whose film work entertained generations of moviegoers.” No mention of his liberalism. In comparison, the print Washington Post on Monday referred to Asner as "liberal activist" on the front page and the first sentence of his obituary.

In later years, Asner embraced crackpot conspiracy theories. According to The Wrap, he spoke to the “9/11 truth” movement. So, promoting the paranoid idea that liberal CBS cancelled his TV show in order to appease conservatives seems mild in comparison. It’s odd that CBS This Morning in 2021 would echo the TV claim.

The weird conspiracy theory on CBS was sponsored by Progressive insurance. Click on the link to let them know what you think.