Someone Tell 2021 MSNBC About 2013 Conservative-Sounding Scarborough on Voter ID!

The hosts and journalists on MSNBC are now going out of their way to eviscerate Georgia for its new voter security law. That’s a little awkward if anyone remembers that one of the biggest names at the network — Joe Scarborough — previously mocked media “lapdogs” for pushing Barack Obama’s flimsy “voter suppression” claims.

In June of 2013, before Joe Scarborough left the Republican Party officially, he hammered the Obama administration’s claims that calling for voter ID is somehow abhorrent. The Morning Joe co-host sounded like some awful right-winger that his 2021 colleagues now despise:

Scarborough scoffed “But this administration and the mainstream media that followed right behind like lap dogs, they all put that presumption in people's heads.” 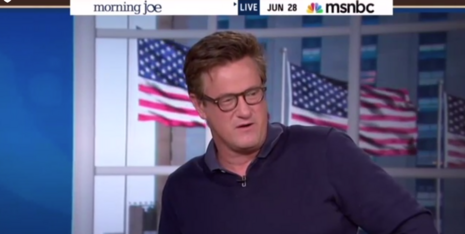 On April 4, 2021, co-host Ali Velshi cheered false attacks about Georgia’s new election security law. On April 7, 2021, Washington Post associate editor Eugene Robinson sounded exactly like the people that past-Scarborough was talking about, saying of Georgia and Jim Crow: “If this not a complete and total verbatim repeat of that, it is certainly a very close rhyme.”

Someone should tell 2021 MSNBC about 2013 Joe Scarborough. He sure sounds like he supports "voter suppression."