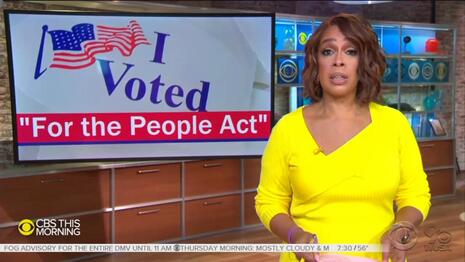 The Democratic power grab to weaken and destroy voting laws in the U.S., known as the For the People Act, received cover from the network hacks at CBS This Morning on Thursday. They spun it as an effort to combat larger Republican aims to enforce “Jim Crow 2.0.” That vile slander went unchallenged by reporter Ed O’Keefe. He even repeated it to a Republican leader in the Georgia State Senate.

CBS glossed over the radical elements of the bill, such as gutting voter ID laws. Instead, O’Keefe went to Georgia and listened to far-left U.S. Senator Raphael Warnock slime voter security issues in that state: “This is Jim Crow redux in new clothes. There is no reason for this.”

Talking to Georgia State Senate President Pro Tempore Butch Miller, O’Keefe parroted the vile attack: "To those who call it Jim Crow 2.0 or Jim Crow in a suit and tie, you say?”

How is voting security efforts like "Jim Crow"? He didn't say.

Regarding HR1, which just past the House, co-host Gayle King sanitized:

An all-out push by Democrats for a massive overhaul of U.S. elections has reached the Senate after being passed in the House. Senators held a hearing yesterday on the so-called For the People Act. The bill would expand early voting and allow for universal mail-in voting.

Fox News described the radical elements in the national bill, something that CBS failed to do:

1. It would eviscerate state voter ID laws that require a voter to authenticate his identity. Indeed, it would force states to allow anyone to vote who simply signs a form saying that they are who they claim they are.

O'Keefe instead quickly noted what the Georgia bill does: "The Republican-controlled legislature's putting the final touches on changes to state voting laws that would mandate new early voting hours, enact stricter I.D. laws for absentee voting, and potentially even regulate who can talk to voters standing in long lines."

The Democratic propaganda was sponsored by Honda and Land Rover. Click on the links to let them know what you think.

GAYLE KING: An all-out push by Democrats for a massive overhaul of U.S. elections has reached the Senate after being passed in the House. Senators held a hearing yesterday on the so-called For the People Act. The bill would expand early voting and allow for universal mail-in voting. The measure comes as 43 states consider Republican-backed proposals to curb voting rights, hours, requires stricter I.D. Checks on mail-in ballots and limit where they can be returned. Nowhere is the issue more urgent than in the state of Georgia. Our Ed O'Keefe spoke with leaders there about this fight.

SENATOR RAPHAEL WARNOCK: If your vote didn't matter, they wouldn't be working so hard to try to stop it. So don't let anybody take your voice or your vote.

ED O’KEEFE: Senator Raphael Warnock will be up for re-election next year when Georgia willing also have a competitive governor's race.

WARNOCK: It certainly has been a very interesting time.

WARNOCK: Georgia is ground zero for the voting rights debate and it is difficult to overstate how important this issue is.

O’KEEFE: The Republican-controlled legislature's putting the final touches on changes to state voting laws that would mandate new early voting hours, enact stricter I.D. laws for absentee voting, and potentially even regulate who can talk to voters standing in long lines. It’s part of a nationwide push by Republicans in the wake of former President Trump's loss that he's actively encouraging.

DONALD TRUMP: Another one of the most urgent issues facing the Republican party is that of ensuring fair, honest, and secure elections.

O’KEEFE: Georgia State Senate President Pro Tempore Butch Miller is among those pushing for the changes.

BUTCH MILLER: We have a lack of confidence in the box and the integrity of the ballot box. We have to restore that.

O’KEEFE: Would Republicans be doing this if Donald Trump had won in November?

MILLER: Let me look at my crystal ball. [Laughs.]

O’KEEFE: Miller says he and his GOP colleagues have received thousands of calls from constituents concerned about the election results.

O’KEEFE: But if it says state of Georgia on the envelope, as it's mailed, you're telling me people are concerned that might not be a legitimate ballot?

MILLER: There might be people concerned about that and rightly so.

WARNOCK: If there's any lack of confidence in our voting system it's because politicians have been pushing the big lie. They are using the lie about voter fraud a a pretext for voter suppression. This is Jim Crow redux in new clothes. There is no reason for this. What we saw was black voters all across the country standing up, other voters of color, young people, women, students, and they made a difference in the election.

MILLER: That is just sad that someone would stoop to that type of name-calling. We want everybody to have a chance to vote.

O’KEEFE: Stopping the Republican-backed changes to election laws is of concern to national Democrats like Warnock and President Biden. They met to discuss the subject with other Georgia Democrats during the President's visit to Atlanta. Do you think Republicans would be pushing to make these changes if you had lost your election last year?

WARNOCK: Well, the fact is I won, and I won as a result of more than a decade of active engagement here on the ground in Georgia.

O’KEEFE: As the Senate continues debating voting rights, the president admitted to Democratic senators this week to some of the changes they want to make, things like mandating automatic voter registration or expanding early and absentee voting to all states nationwide could be difficult to get done in the closely divided Senate unless they change the rules. Anthony?

ANTHONY MASON: Ed, it's not just the politicians feeling the pressure, though, it's the corporations, too.

O’KEEFE: That's right. Big employers in Georgia like Coca-Cola, delta airlines, home Depot, U.P.S., all of them facing pressure from voting rights groups, Democrats in the state saying, “you know, you should be speaking out about this because corporate pressure often can influence a debate.” The Georgia Chamber of Commerce says they support accessible and secure voting while upholding election integrity and transparency. A neutral statement there. We'll see. One other thing that Miller pointed out, he says the legislative process is, quote, “like a stew, and it cooks real slow.” The point being there were a lot of proposals, very few are going to make it into the final dish that gets served up to the governor.