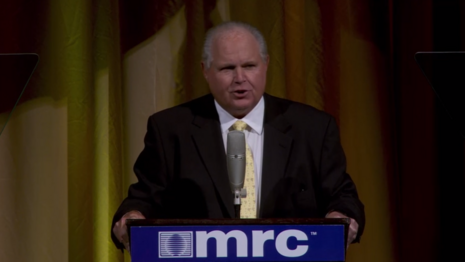 Wednesday brought the sad news that conservative radio icon Rush Limbaugh has passed away after a battle with stage four cancer. We at the Media Research Center were fortunate enough to have him attend three of our galas, including the MRC’s 30th anniversary in 2017.

Introducing him that year, founder and President Brent Bozell praised, “Rush has been at our side from the very start, giving oxygen to our work to millions of his followers on a regular basis.” He also lauded Limbaugh as “the leader of the conservative movement.”

In his speech, the radio star highlighted all the examples of the crazed, unhinged liberal media shown at the 2017 gala. Limbaugh blasted the partisans as "dead wrong... dead stupid." He warned:

You can watch his entire 2017 appearance here:

So much can be said of our honoree, but one statement puts it all in context: He launched a nationally syndicated radio show on August 1, 1988, and along with it, a revolution.

In no time his empire would grow from 56 stations to over 600, reaching 20 million listeners weekly. Nineteen years later, there are dozens of other talented nationally syndicated talk show hosts, and hundreds more on the local scene, yet our honoree is still the #1 reigning talk show host in the land.

As Rush became a force to be reckoned with, all across America you could hear the muffled thud, thudding as millions of liberals collectively swooned in dismay at the thought of the existence of this monster.

Here is Rush accepting the award:

In 2004, Limbaugh made a surprise appearance at that year's gala, delighting the crowd. He closed by telling the audience:

I’m only up here because people like you have been as loyal listeners and supporters for all these years that you have. And people are constantly telling me how much my radio program means to them. But no matter what it means to them or you, what all of you and everybody else who have made my program what it is has meant to me, there’s no way I could repay everybody for that. I wish there were a way, but there isn’t. So all I can do is keep doing it and to thank everybody for their support and to urge everybody to stay on the truth and the path.