Friday's CBS This Morning tossed softballs to socialist Congresswoman Alexandria Ocasio-Cortez (D-NY), completely ignoring her smear that Senator Ted Cruz (R-TX) tried to “murder” her with the January 6 riot. Co-host and Democratic donor Gayle King also played the congresswoman's Instagram recounting of the attack, failing to mention that the person who came to find her was a police officer, not a member of the mob.

In 2020, journalists minimized, ignored and discounted Tara Reade’s assertions of sexual assault by Joe Biden, but King didn’t treat Ocasio-Cortez the same way: “You shared for the first time, congresswoman, your experience with sexual assault. Why did you decide to share it with us? Because it's very painful certainly and very private.”

Of course anyone recounting such trauma must be painful, but Reade’s retelling didn’t get similar sympathy.

At no time during the nearly nine minute interview did King or co-host Anthony Mason mention a tweet by Ocasio-Cortez in which she smeared Cruz for “almost having me murdered” and that she is “happy to work with almost any GOP [member] that [isn’t] trying to get me killed.”

But none of this should be particularly shocking. In 2019, CBS correspondent Nikole Killion promoted Ocasio-Cortez as a possible 2020 Democratic vice presidential nominee. Of course, the socialist is constitutionally ineligible because she’s too young.

The liberal hypocrisy on CBS was sponsored by Colgate.

A transcript of the segment’s questions can be found below. Click “expand” to read more.

GAYLE KING: In an emotional Instagram Live appearance this week, Congresswoman Alexandria Ocasio-Cortez talked about hiding from the assault on the capitol.

ALEXANDRIA OCASIO-CORTEZ: I'm like this and the door hinge is right here, and I just hear “Where is she? Where is she?” And this was the moment where I thought everything was over.

KING:  Boy. Ahead we'll talk with Ocasio-Cortez and fellow Democratic congressman Jason crow about the riot and its aftermath only on CBS This Morning. 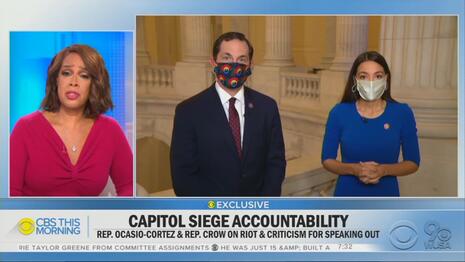 KING: Welcome back to CBS This Morning. Democratic Congresswoman Alexandria Ocasio-Cortez led fellow lawmakers on the house floor last night sharing their personal stories from the assault on the Capitol. Democrats are pushing Republicans to take action in response to the riot including holding some GOP members accountable. Ocasio-Cortez and Democratic congressman Jason Crow were forced to high as rioters stormed the building. They join us now for an exclusive interview. Congresswoman, I want to start with you. That day, I remember it was upsetting and so frightening watching from the privacy from my kitchen. To hear your terrifying account of that day was in a word terrifying to hear the details. I wonder if it's triggered all sorts of things for you. I think sometimes when you speak it, you're reliving it again. I'm wondering what the experience has been for you.

KING: You shared for the first time, congresswoman, your experience with sexual assault. Why did you decide to share it with us? Because it's very painful certainly and very private.

TONY DOKOUPIL: Congressman Crow, it's Tony Dokoupil here. All of our viewers will remember the photo of you on the day of the insurrection comforting your colleague, Congressman Susan Wild. You also stated in an interview with us the next day that the experience brought back your recollections of combat in Iraq, in Afghanistan. And one could understand that. There's a legacy to trauma. It compounds as the Congresswoman put it, and now a month on I'm curious how are you feeling when you think back to that day, January 6th, 30 days on?

KING: I'm so glad that you're both all right. And you're so right, Jason, when you talk about a stigma. The other thing I worry about is where is the human connection, where is the empathy here? You have reports today of people doubting your version of events, congresswoman, I want you to comment on that. And number two, you would think that at a time like this we would all bond together and help each other. Have there been anything behind the scenes of Republicans reaching out to say, boy, this was scary, I'm so sorry this happened to, I'm so sorry this happened to us? Is there anybody working behind the scenes to try to figure out how we can unite and come together about this?

KING: Jason, what do you say about the doubters? And please know, we are not asking either one of you to justify what happened to you today. No one can talk about your trauma. Congressman Crow?

KING: I want to ask you both because we're running out of time, about Congresswoman Marjorie Taylor-Greene. You know, yesterday the House has voted to strip her of her position on the committee. But I'm wondering if either one of you have concerns and fears going forward about working with her. I know Congresswoman Ocasio-Cortez, you had called for her to be expelled. Are you worried about working with her? Are you afraid of being around her?

KING: We've seen it. That's why I'm asking this question. Are you worried or afraid? And then we've got to go.

OCASIO-CORTEZ: I would hope that representative Greene shows some reflection. I will feel safer when she does. But if she doesn't, it remains a very tense situation.

KING: All right. Congresswoman Ocasio-Cortez and Congressman Crow, we thank you for your time this morning.