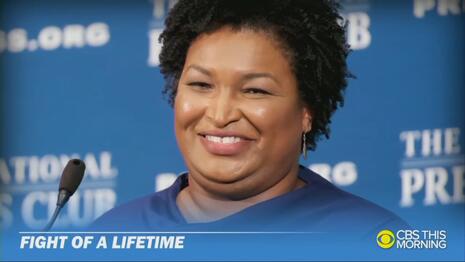 In the 7 AM hour, reporter Paula Reid huffed that Donald Trump’s efforts to challenge the election result “allows him to continue to delay concession and undermine the trust and the outcome of this election.” But Abrams in the 8 AM hour got no such skepticism. Instead, reporter Mark Strassmann gently asked the Democrat: “[You] lost by 55,000 votes. So you've never conceded that race because you believe it was stolen from you?”

Strassmann stood in front of an Atlanta mural of Abrams, cheering her on: “We're showing this mural of Stacey Abrams because it seems timely. This is clearly Stacey Abrams' moment. In this recent election, a million more Georgians voted than four years ago. And voter registration is clearly a team sport, but the captain of that team is Stacey Abrams.”

Again, Abrams is a partisan Democrat whose goal is to elect more Democrats. Yet Strassmann returned to the mural put up by other Democrats:

Showing you this mural one more time. At the very top of the building someone repainted it. You can see the names Ossoff and Warnock. They are the two Democratic candidates running for U.S. Senate who will race in next January's runoff election. 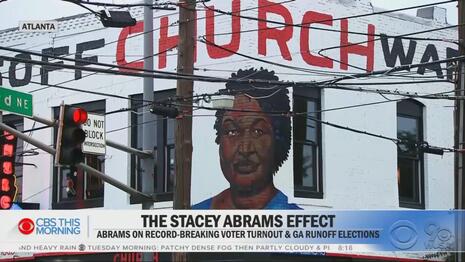 Democratic donor/This Morning co-host Gayle King was ready to put Abrams in a Biden administration: “Did Stacey say anything about a possible position in the Biden administration? I've heard people say what does Stacey Abrams want? Whatever hell she wants, ambassadorship. Has she said anything at all about that?"

In April, King coached Abrams on a possible vice presidential run, touting her “great answer.” In June, the host pushed the vice presidency again,  lauding, “Stacey Abrams I hope this is not our last conversation. Something tells me it isn't.”

The Democratic propaganda on CBS was sponsored by Cadillac and Blue Cross. Click on the links to let them know what you think.

ANTHONY MASON: Stacey Abrams’s fight of a lifetime. She tells us how she helped make Georgia a swing state again while battling voter suppression.

TONY DOKOUPIL: The state of Georgia set an all-time record for the number of votes cast during this election, and this morning those votes are still being counted. Right now, President-Elect Joe Biden is leading President Trump in the traditionally red state by more than 12,000 votes. And many are crediting the efforts of the one woman, one woman in particular, the state's former House Minority Leader Stacey Abrams. Mark Strassmann is in Atlanta where he spoke about rallying voters. Mark, good morning to you.

MARK STRASSMANN: Good morning. We're showing this mural of Stacey Abrams because it seems timely. This is clearly Stacey Abrams' moment. In this recent election, a million more Georgians voted than four years ago. And voter registration is clearly a team sport, but the captain of that team is Stacey Abrams.

COLBERT: Are you allowing yourself time to celebrate?

STACEY ABRAMS: I had about 17 minutes on Saturday afternoon. I'm good. [Clip of her giving a speech.] Good evening, my fellow Americans.

STRASSMANN: Much of America met her last year giving the Democratic response to President Trump's State of the Union address. But it was last week when Abrams really made her mark. Nearly five million Georgians voted, a record. Joe Biden's poised to win here. He should thank Abrams and New Georgia project. They've helped register 800,000 new voters in Georgia, a stunning number, mostly in communities of color.

ABRAMS: We knocked on doors in pockets of communities that had never been touched and we kept coming back. Is there anyone else in your family who needs to register? What about your neighbors?

STRASSMANN: Stacey Abrams, now 46, graduated from Spelman College and Yale Law School. She became a state rep and eventually Georgia's House Minority Leader. But her passion since she was 17, fighting voter suppression, barriers to the ballot.

ABRAMS: Politicians believe their way to preserve their power is to impede the ability of voters to be heard, and typically they target people of color, young people and they target the poor.

STRASSMANN: In 2018, Abrams ran for governor in Georgia. Barack Obama endorsed her. Oprah Winfrey campaigned for her. But the year before, this Republican-run state slashed nearly 670,000 voters from its rolls. Nearly 70 percent of them black. Georgia's Secretary of State overseeing the purge, Republican Brian Kemp who was Abram's opponent in the governor's race. She lost by 55,000 votes. So you've never conceded that race because you believe it was stolen from you?

ABRAMS: No. I believe it was stolen from the voters. I just said it can't happen again and that has been my mission for the last two years.

STRASSMANN: After that loss Abrams founded another group, Fair Fight. In this recent election, it worked to blunt voter suppression in 20 states.

STRASSMANN: Do you think you're helping change the trajectory of the Democratic Party?

STRASSMANN: Abrams' next challenge is the Super Bowl of runoffs in January. Georgia will elect both its U.S. Senators. Control of the Senate itself hangs in the balance.

ABRAMS: People will do almost anything when they know success is likely. It is the actual thing that can change the future, and I believe they'll show up.

STRASSMANN: Showing you this mural one more time. At the very top of the building someone repainted it. You can see the names Ossoff and Warnock. They are the two Democratic candidates running for U.S. Senate who will race in next January's runoff election. Something else to consider here. If you've ever been to Atlanta you've often seen murals of Congressman John Lewis. Abrams told me his death bed plea was go vote.

GAYLE KING: I keep hearing that story, Mark. Did Stacey say anything about a possible position in the Biden administration? I've heard people say what does Stacey Abrams want? Whatever hell she wants, ambassadorship. Has she said anything at all about that? Maybe too premature?

STRASSMANN: Her focus, honestly, Gayle, at this point, is this January runoff. They honestly believe that now that they've proved to people that if you register and you vote, you can make a difference, it will be much easier to get them to vote again. Runoffs typically turnout is not as good as the general election. They're really hoping to sustain that momentum because they know that Republicans here are really going to bring all possible weapons to bear on keeping control of the U.S. Senate by winning both of these seats.

KING: I know she's all over that race. There is a little bit of a Republican versus Republican drama, Mark. You have got Senator Kelly Loeffler and David Perdue who are involved in those runoffs, calling for the resignation of Georgia's Republican Secretary of State because they say this election was an embarrassment. Do you think this movement has any legs, anything to this?

STRASSMANN: I mean, they're turning on each other, Gayle, because they're looking for a way to put the President over the top. By all accounts, this recent election, record turnout, new machines went very, very smoothly. There has been zero proof, I mean zero of widespread irregularities. I mean nothing at all.

KING: That seems to be consistent about what we're hearing nationwide. Always good to see you in Atlanta, Georgia.