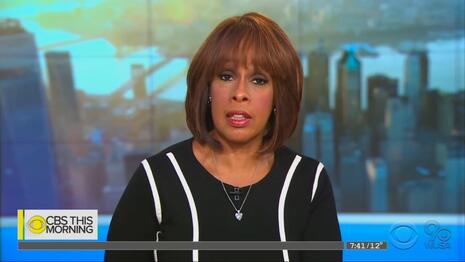 CBS This Morning co-host Gayle King is steeped in the Democratic Party. She donates to Democrats. She vacationed with Democrats and has lobbied her Democratic-leaning friend Oprah Winfrey to run for president.

All of that would be fine except for the fact that King is allowed to operate as though she was a real, objective journalist. She has even moderated a 2020 Democratic primary debate. But King isn't a fair and balanced journalist.

King is good friends with former 2020 Democratic presidential candidate Cory Booker. As The Washington Free Beacon reported in 2019, sometimes the host disclosed this fact, but sometimes she didn’t. In May and February of 2019, she did. The Beacon’s David Rutz noted:

However, Booker was a guest on CBS This Morning on Jan. 17, 2018, and Jan. 26, 2018, with King being one of the CBS interviewers asking him questions both times, and the show did not disclose their relationship either time.

In 2012, King felt compelled to deny to then-co-host Charlie Rose a romantic relationship with Booker: “It's not hooking up, Charlie. No boinking has occurred. We're really good friends.”

Gayle King has given money to Democrats and vacationed with Democrats. She has failed to disclose close friendships with one Democrat who was considering a presidential bid and lobbied another Democratic-leaning friend to run against a Republican. King is a partisan who deserves no consideration when it comes to debate moderators or any serious role in vetting 2020 candidates.

If CBS was serious about objectivity, the network would save the political interviews for journalists who care about fairness.

For more information journalists don’t want you to know, check out our series: Facts Feared by Leftist Media.