Britain was just hours away from finding out the results of its latest Brexit-contested prime ministers race on Thursday. Both ABC and CBS covered the fight between Conservative Boris Johnson and far-left Labour leader Jeremy Corbyn. But CBS ignored the ugly charges of anti-Semitism that have followed Corbyn and his party.

On ABC’s Good Morning America, reporter James Longman at least noted, “Opposition Jeremy Corbyn has had his own issues, dogged by allegations of anti-Semitism in his Labour Party and unwilling to make public his own position on Brexit.”

Over on CBS This Morning, reporter Mark Phillips uncritically said of Corbyn: “[Johnson’s] main opposition comes from the Labour Pary’s Jeremy Corbyn who says he'd negotiate yet another divorce deal with the EU and hold another referendum on whether the UK should leave. He'd also nationalize many of Britain's large public industries.”

In addition to not using the word socialistic to describe Corbyn’s policies, no mention of anti-Semitism.

Here are some of Corbyn’s flirtations with Jew hatred. He praised, and then had to issue “regret” for an anti-Semitic mural that “depicting Jews as conspiratorial world manipulators.” Corbyn spoke alongside Holocaust deniers in 2013. He has referred to Hamas as his “friends.”  The politician also appeared at a memorial ceremony for Palestinian leaders believed to be involved with the 1972 Munich killings of Israeli athletes.

While covering Brexit and British elections, the networks have repeatedly avoided this side Corbyn. It got so bad that when a top Labour member of Parliament resigned in 2018, denouncing his own party as “anti-Semitic and racist,” the networks skipped that as well.

Back on GMA, however, Longman made sure to describe Johnson as “current prime minister and Trump favorite.” That, apparently, is a key fact needed to be pointed out.

GEORGE STEPHANOPOULOS: Also overseas, a high stakes election under way in Great Britain. Voters are heading to the polls right now deciding whether or not to keep Prime Minister Boris Johnson in power with Brexit on the line yet again. James Longman has the latest in London. Good morning, James.

JAMES LONGMAN: Yeah, good morning, Robin. This is the most important UK general election in a generation. Britain is heading to the polls to elect a government in the hope of finding a solution to that Brexit crisis. Boris Johnson, current prime minister and Trump favorite is fighting to keep his Conservative Party in power for a tenth year. His “Get Brexit done” slogan has cut through but the opposition is asking how? His simple message may win him votes, but his critics say he's thin on detail. Opposition Jeremy Corbyn  has had his own issues, dogged by allegations of anti-Semitism in his Labour Party and unwilling to make public his own position on Brexit. Both leaders divisive in this disinformation election. Johnson's party criticized, for instance, for challenging its Twitter handle to FactCheckUK to dupe voters during a TV debate. And he’s avoided scrutiny appearing to hide in the refrigerator rather than face this TV anchor. Humor has long been Johnson's go to move and lighter moments like his his Love Actually-themed campaign ad with his party's lead narrowing, the joke could be on him, George.

TONY DOKOUPIL: Staying overseas, Britain is holding an election this morning that could finally decide the long-running Brexit battle. Voters are choosing all 650 members of the House of Commons. It is the country's third general election in less than five years. But some analysts are calling it the most important there in decades. Mark Phillips is in London for us this morning. Good morning. So what's really at stake here? 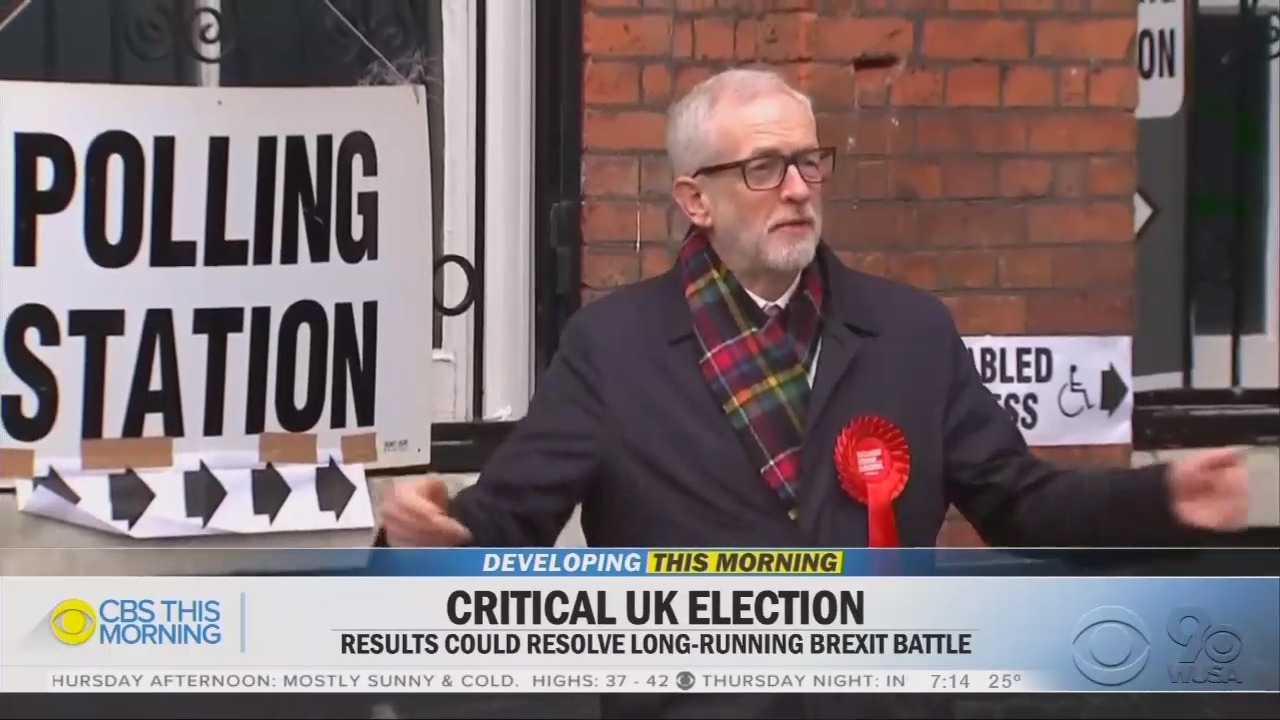 MARK PHILLIPS: Good morning. What's at stake here is more than who just gets to run the country. It's about what kind of country this will be. There's even more at stake here than whether Britain stays in or leaves the European Union. For Boris Johnson, the sitting prime minister, this election is about getting the parliamentary majority he needs to bulldoze his version of Brexit through. And he's provided some visual aides to make his points. He says he'd take the United
Kingdom out of the European Union by the end of next month. His main opposition comes from the Labour Pary’s Jeremy Corbyn who says he'd negotiate yet another divorce deal with the EU and hold another referendum on whether the UK should leave. He'd also nationalize many of Britain's large public industries. The waters are even further muddied here by the smaller parties that could split the vote, and the opinion polls show the gap between the two major parties is, in fact, narrowing. Gayle, it's unclear whether this election will, in fact, sort anything out.