Gayle King, the New Power Broker at CBS This Morning, Is an Obama Friend, Dem Donor

Early on Monday, the news became official that co-host Norah O’Donnell is leaving CBS This Morning to become the new anchor of the Evening News. Also departing is co-host John Dickerson. Considering that disgraced co-host Charlie Rose departed in 2017 amidst sexual harassment claims, that leaves Gayle King as the incumbent star and power broker at This Morning.

What does that mean for objectivity? The facts aren’t encouraging. King is a Democratic donor with contributions to Barack Obama, Harold Ford Jr., the DNC and other Democrats. On August 8, 2016, she recounted going to Barack Obama’s birthday party at the White House. An excited Rose wondered, “And you danced with the President?”

King vacationed with the Obamas. On April 21, 2017, she ridiculously defended this by saying, “My vacations are not political and so I went on vacation with a great group of people and, to me, that's not a political statement.”

On Monday, the This Morning co-host interviewed 2020 candidate Cory Booker. Co-host Dickerson was forced to admit that “Gayle is good friends with the senator and has supported him in the past.”

Also on Monday, King vaguely mentioned the harassment problems at CBS, lamenting, “We've had a lot of bad press coming from inside the building which I think is very disturbing to me because I think most people that work here support, respect, admire, cheer each other on.”

King, in the past, has expressed annoyance about having to cover the sexual abuse allegations against Rose. On May 3, 2018, she scolded, “I don't know what to say about this.... I don't know what more we can do to Charlie Rose except a public flogging. He's gone.... I’m sick of handling it.”

Speaking of the man who allegedly exposed himself to multiple women, grabbed them, and made sexual comments, the co-host still called him a friend: “When the story first broke, I said Charlie was my friend. I still consider him a friend. I know that's probably not the politically correct thing to say at this moment. But I don't believe in abandoning people when they're down.”

The next day, under pressure, she reversed course and concluded, “Let the chips fall where they may.”

A partial transcript of the announcements of the changes at CBS can be found below. Click “expand” to see more. 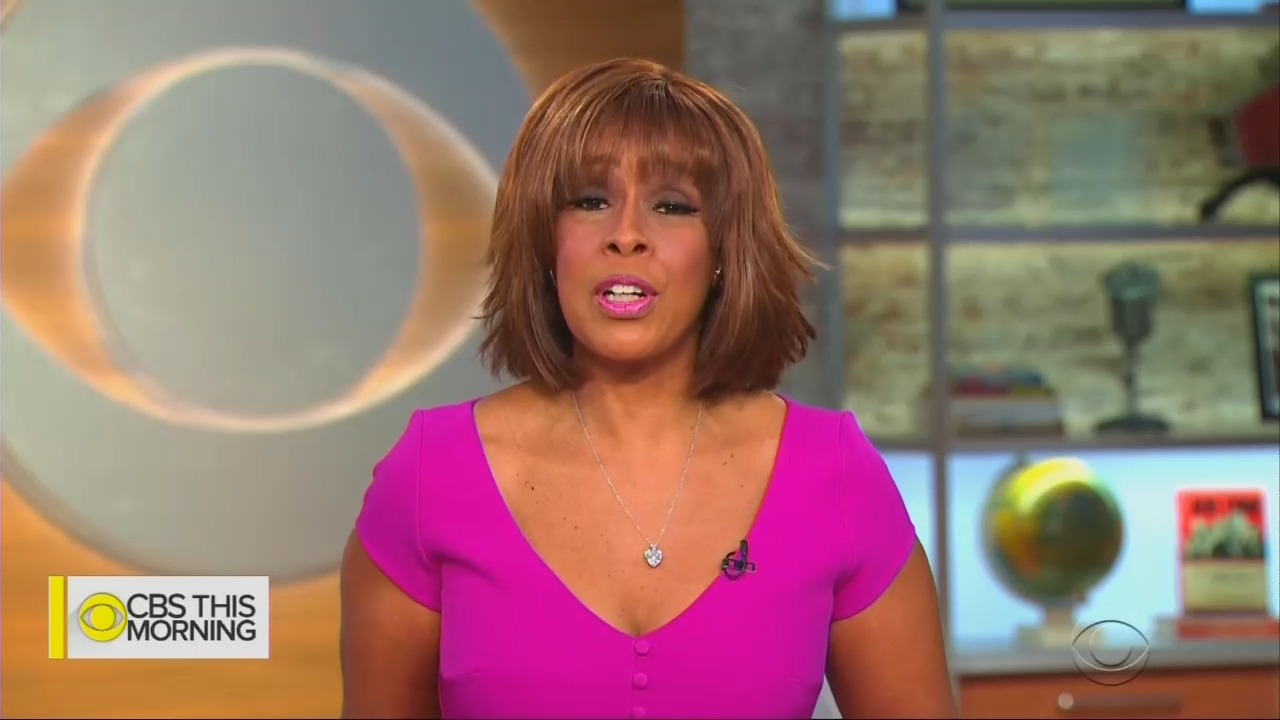 GAYLE KING: Before we get back to all of that news, and there is a lot of news today, we have some headlines of our own this morning. Here at CBS we're announcing major changes today moving forward to get better at what we do. You might have been reading about all the speculation. We thought today would be a good day to hear it from the horse's mouth. Hello, horse. Let’s start with you, Norah O’Donnell because this is a big day for Norah O’Donnell. She has been named – have you heard —  anchor and managing editor of the CBS Evening News. In our world of television news, there's no job that carries a prouder tradition or more crucial responsibility. Jeff Glor as we know is a fantastic journalist and trusted colleague here.

His award-winning reporting has shed light on important issues and highlighted the humanity in the world. His conversations, you should know with CBS News, continue, and we all hope very much that he will continue working here. It will be his decision. Norah will take the helm of the CBS Evening News this summer. And starting from the fall, she will anchor from Washington D.C. That’s big. So we focus even more on stories from the center of power that impact the lives of Americans across the country. Norah, by the way, will also serve as the anchor’s lead anchor for political coverage, reporting on primaries and election nights across the country and — yeah, you got a lot of jobs — and she will continue her role as contributing correspondent on 60 Minutes. Bravo, Norah O’Donnell. Bravo

NORAH O’DONNELL: Thank you. I think about the legacy. I think about the history of CBS News and it's incredibly humbling to accept this position. I was looking through some things that Walter Cronkite said. He said, “I can't imagine a person becoming a success at life without giving everything they've got.” and so I'm going to give this everything I've got.

KING: I believe that.

O’DONNELL: And so, at CBS News, I don't stand on the shoulders of my colleagues, they carry me on their backs. So, this is a great moment. It's the moment, I think, for all of us as CBS News, as Susan Zirinsky has taken the helm. It’s the moment we've all been waiting for. There's been such speculation about it. But the truth is a new era begins and it's a great era.

KING: And you're the third woman, single woman,  to host an evening broadcast. And you’re doing it from Walter Cronkite’s chair.

KING: The news should rarely be about us and sometimes it's not even true. Can I just take a minute to go off script about that? Because here we were Thursday — I know I was supposed to stick to the script, but I've just got to say this — Thursday I'm flying to London. We are working on our prime time royal special.. The news breaks at 1:30 is elbowing, insisting that Norah leave CBS This Morning. It’s so amazing to me, Norah, that after seven years together that now people would say that you and I have some beef.  I have no beef with you. You have no beef me with me. Tina Brown summed it up nicely. She said, “This never happens to men.” This kind of cutthroat business. “The reality is it's two great jobs for two great women,” she said. And I also think -- I know that that's true. I look at Susan Zirinsky who if you haven't heard outside the building is a bad ass. She's our CBS president. When it was announced that she was taking this job in January, she said there was going to be some changes. She's going to look at the lay of the land and decide. She could have come in here with a weed whacker and we'd all be on 57th street going, “Taxi.” But what she decided to do is stake a look and see what she thought would work best and what job would serve our role. You know, this is a business about ratings. When ratings don't work, they're making changes. And so, they are making changes that they will hope will lead to better things. And I’m with you. I’m going to give it 110 percent. As will you. As will you, John.

O’DONNELL: You gave me great advice and Oprah gave me some great advice not to listen to the critics in the cheat seats. It’s not the critic who counts. And I know you have Oprah. But I want to thank you for being my work BFF. You have made me better in everything I have done.

KING: We've had a lot of bad press coming from inside the building which I think is very disturbing to me because I think most people that work here support, respect, admire, cheer each other on. Even going to Washington was Susan's Zirinsky’s idea, not yours. But it will make everything better and different. I'm cheering you on.