CBS This Morning co-host John Dickerson on Tuesday conducted a softball interview with the star and the director of the new left-leaning Dick Cheney film Vice. Dickerson offered no tough questions and hinted that the film was accurate.

Talking to Christian Bale and Adam McKay, Dickerson gushed, “Like McKay, Bale studied Cheney from the tiniest details to the big ones. Like suffering multiple heart attacks.” Bale (who plays Cheney) then proceeded to explain how he had a cardiologist act out what it’s like to have a heart attack.

According to a review by National Review film critic Kyle Smith, the film veers from conspiracy theory to smears:

Near the start, writer-director Adam McKay, who somehow segued from Will Ferrell movies to this InfoWars-style garbage dump, implies that Cheney’s father-in-law murdered his mother-in-law by drowning her in a lake. Huh? What does this have to do with Cheney? Is there more evidence for this than is presented in the movie, which is none? The movie’s Lynne Cheney, played by Amy Adams, also seems to think her dad murdered her mom. Does Lynne Cheney actually think this?

After dropping some light murder innuendo, McKay just bustles on. Dick Cheney (into whom Christian Bale disappears) is portrayed as a dirtbag who was kicked out of Yale for boozing and brawling. 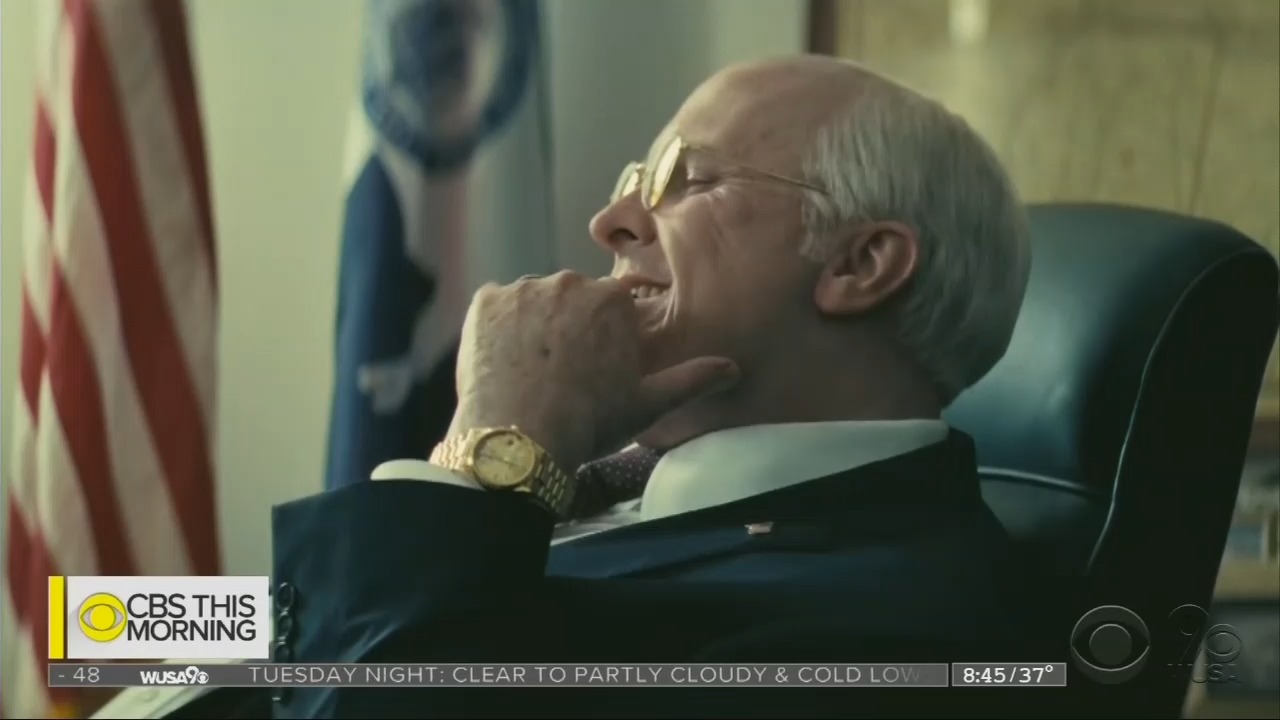 Smith added, “Vice claims that Bush started the Iraq War not because he (and Cheney) thought it was the right thing to do but because they needed a PR stunt to make Americans like their team.”

None of that, of course, came up during the CBS lovefest. Instead, Dickerson portrayed McKay as a student of the truth: “McKay kept reading. Eighteen books in all, he said, to gain insight into the man who pushed for the invasion of Iraq in 2003 and backed the most aggressive measures for pursuing terrorists at home and abroad.”

How liberal is Vice? Even the decidedly non-conservative Variety hammered the movie as a "vengeful circus for liberals”  that "invites us to revel in Dick Cheney’s Greatest Hits Of Infamy.” 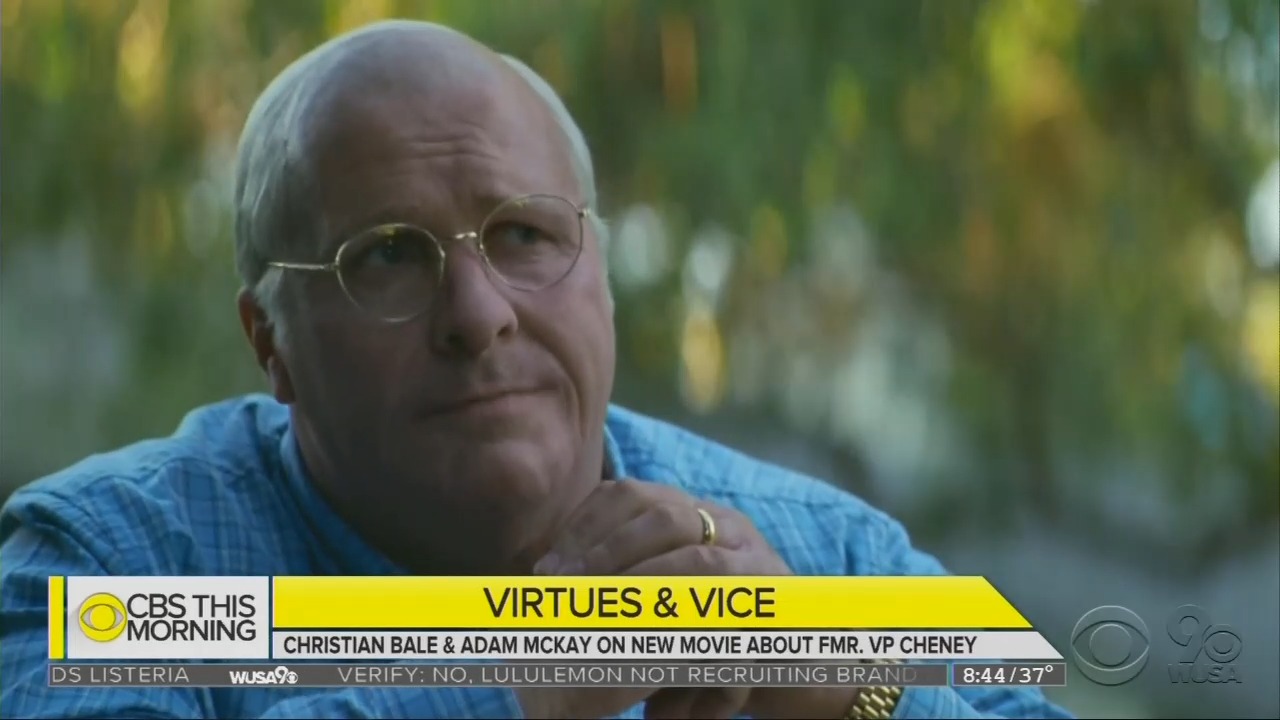 JOHN DICKERSON: The new movie Vice has an early lead this awards season with six nominations for Golden Globes. The dark comedy charts the rise of Dick Cheney to become the most powerful vice president in history. The movie reunites actor Christian Bale who plays Cheney with Adam McKay who directed Bale in The Big Short. We spoke with them in Los Angeles.

“DICK CHENEY”: The vice presidency is a mostly symbolic job.

DICKERSON: The film portrays Cheney as a shrewd political operative.

“CHENEY”: However, if we came to a —  different understanding — 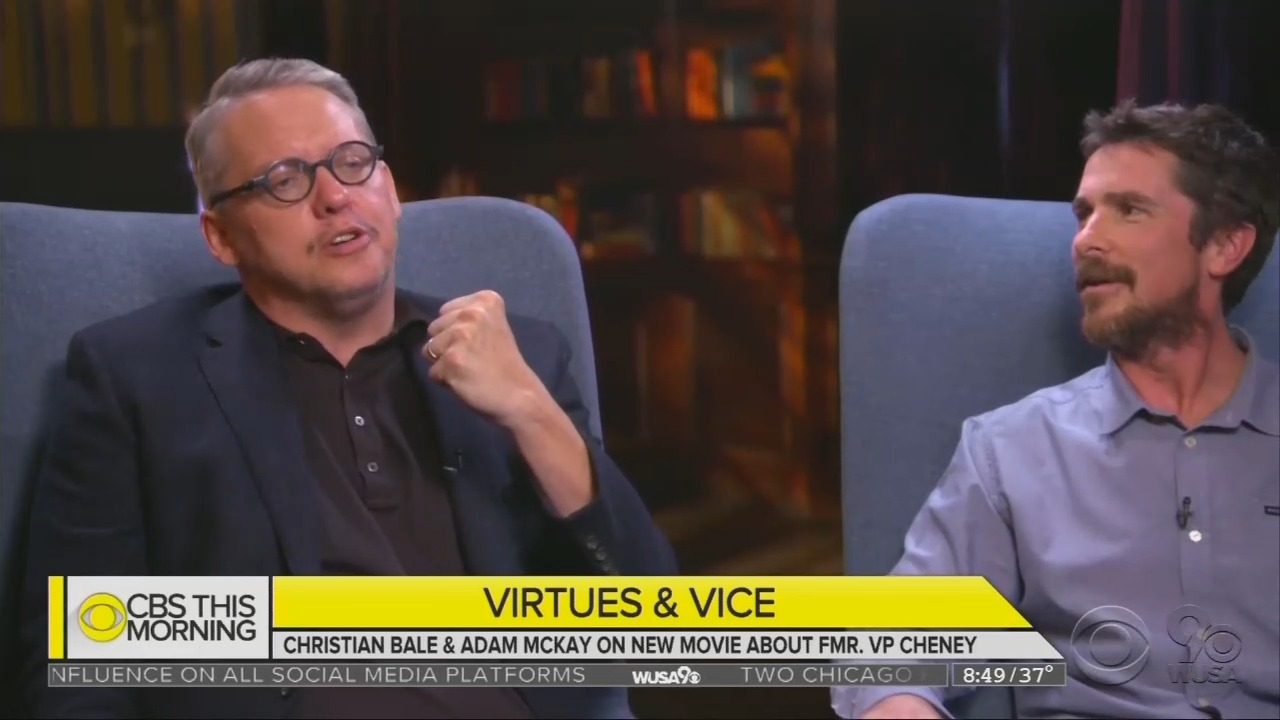 DICKERSON: The idea for Vice happened by accident. Down with the flu, director Adam McKay picked up a book on Cheney.

ADAM MCKAY: I started reading it. I was like, “Oh, my God!” I saw a love story there. I saw an arc of ambition.

DICKERSON: At which point do you start thinking about Christian? While you're writing it or while you’re reading it?

CHRISTIAN BALE: When Dick Cheney is described as a man lacking any charisma. Right? That was when you thought, “Got to be Bale.”

“CHENEY”: No one has shown the world the true power of the American presidency.

MCKAY: I saw change in America. I saw fear, paranoia.

“DONALD RUMSFELD”: Are you even more ruthless than you used to be?

DICKERSON: Intrigued, McKay kept reading. 18 books in all, he said, to gain insight into the man who pushed for the invasion of Iraq in 2003 and backed the most aggressive measures for pursuing terrorists at home and abroad. Adam, you've talked a lot about power. Is power an actor in this play, or is power kind of coursing through it?

MCKAY: It was one of the things that drew me to the story. How does power affect human beings? Dick Cheney was a guy through very quiet, brilliant means of understanding how our elaborate government works, took on this incredible amount of power while never having to stand in front of the spotlight really.

BALE: He claims to have absolutely zero regrets. He's very strong minded, and he will not back down ever.

DICKERSON: Having worked with Bale on The Big Short, McKay had him in mind while writing Vice. To play the former VP,  Bale shaved his head and backed on some 40 pounds.

LYNNE CHENEY: Half the room wants to be us, the other half fears us.

DICKERSON: Famous for physical transformations, in 2004 Bale lost 60 pounds to play an insomniac in The Machinist only to bulk back up the following year to play Bruce Wayne in Batman Begins. In 2010, he slimmed down and took home a supporting Oscar for The Fighter. Then shaved his head and gained a paunch for American Hustle. Bale attacks every role with the same intensity. How long do the characters stay in your head?

BALE: Do they ever leave? I don't know really, you know.

DICKERSON: Do you have moments of Cheney that still happen —

BALE: Doing that —  it sounds odd but you do a little bit, yes.

DICKERSON: Like McKay, Bale studied Cheney from the tiniest details to the big ones. Like suffering multiple heart attacks. Christian, how do you learn to play somebody having a heart attack?

BALE: I went and I got a wonderful cardiologist to act out -- he didn’t want to do it initially -- he didn't want to do it initially. I said, “Let’s get up on our feet. Can you show me the extremes from the clutching to the just sort of the strange feeling in my stomach. And I had him actually act it out for me. Then I just stole his performance and put it in the film.

DICKERSON: Did you have to go somewhere and practice having heart attacks?

BALE: Yeah, you do that. You just sort of walk around and do it, you know, you always look a bit mental when you're an actor. To maybe you are a bit mental. I'll be doing things not realizing it, then my son will look at me as I'm talking to myself or pretending to have a heart attack. He said, “Daddy, and please stop doing that. I don't like it.”

DICKERSON: During production, McKay said he smoked heavily and overate like Cheney who reportedly ate a dozen doughnuts and smoked three packs a day early in his career. When the filming ended, Adam tried to get back into shape.

MCKAY: Then I had like tingly hands, but my stomach was queasy. I think we think of heart attack as chest pain, arm pain. So, I told my trainer, I'm fine, don't worry about it. The second he left I remembered this fella [Bale] telling me like, how do you want the heart attack? You want queasy stomach or like —  and I ran upstairs and took four baby aspirin and called 911. And when I got to the doctor, he's like, why did you do that? I said, my lead actor had told me that was the symptom. He's like, well, because you did that, you have no damage to your heart.

DICKERSON: If you'd phoned in your character, hadn't gone to the cardiologist, hadn't gone deep, you wouldn't know all that.

BALE: Thank you for where you're going -- I saved his life. Yes.